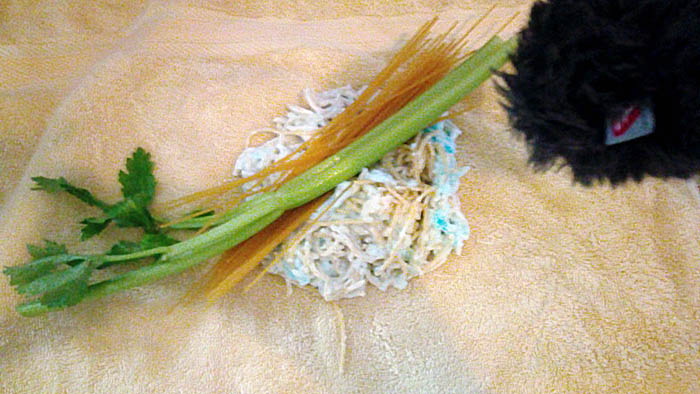 It’s been a busy week for us here at zapsplat.com recording new sound effects and we’re steaming towards 14,000 in our library. Here are some of the sounds we’ve been working on… 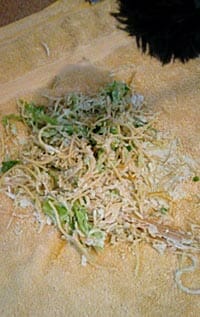 I never get bored of designing and recording those horrible bone breaks and limb tearing sound effects that are so popular with our filmmakers and game developers. Creating them is surprisingly simple with some everyday food items found in your kitchen, however it’s a messy process. I used cooked spaghetti, mixed in some shaving gel for the squelchy, fleshy sound and then used dried spaghetti and celery for the crunch. Mixing it all together and performing a variety of crunches and squeezes, I was able to create a few variations of limb breaks which can be found in our Gore and Bone Breaks category.

The end result as you can see is a messy pile of inedible mess. However this was not wasted… In fact, this is one of the rules we always follow. If we perform a recording session and end up with lots of mess, be it debris, mushed up food as here, or anything else, we always record the aftermath. Smashing rocks for example is great fun and delivers amazing sounds, however all that debris can be recorded in many ways.

We used the ‘mess’ left over from this session to create some free leech/worm, snail and crab sound effects. We performed the sounds of crabs having their shells removed, snails being squashed and leeches or worms slithering around. So be assured no creatures were harmed in the making of these sound effects. They can be found in our Slugs and Worms category

Our recycle bin is always full with all manner of items, from boxes to glass bottles, so we recorded some great trash movements and glass breaks. It’s pretty therapeutic smashing things up so any chance I get to do so, I take. We’ve a growing collection of glass impacts which can be found here.

We’re going to be working on some chop sockey martial art vocalisations on Friday as feedback from our users suggests we need more of these, so watch this space!