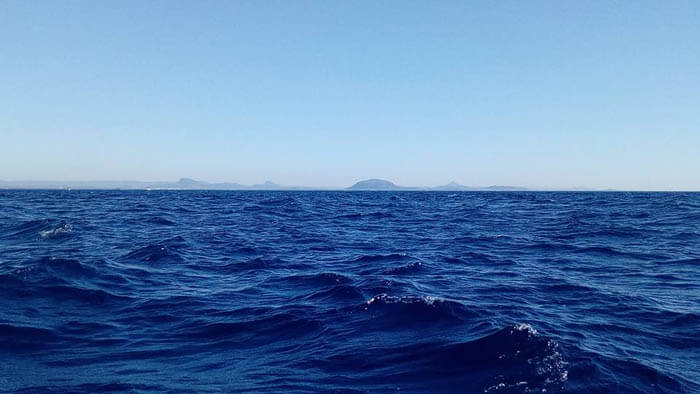 A day out at sea, recording humpback whales and boats

Last month we received our Aquarian Audio H2a Hydrophone and wrote a little article about it. So we’ve been itching to take it out and what better time of year than now when here in Queensland Australia, as it’s whale season. Right now, humpback whales are migrating north to mate in the warmer tropical waters, before heading back south in a few weeks (giving us another opportunity to record them again).

So we organised a day out in a boat to not only record the whales, but also every aspect of the trip, including the boat. The guy we went out with is a spear fisherman, off out hoping to catch some Spanish mackerel. Our aim isn’t so much to get wet, but rather stay dry onboard while doing our best to get some amazing free sound effects. 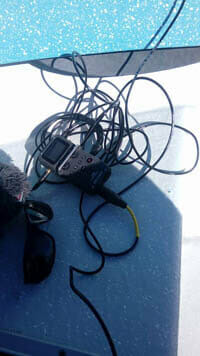 We used a Zoom H5 for the underwater recordings with our hydrophone.

For a British born ex-pat like me (we’ve only been in Australia for 7 months as of this writing), seeing a humpback whale up close, or at least in real life as opposed to a wildlife documentary on TV is a novelty and an experience to remember. To record them personally was an absolute privilege, and the moment I dropped the microphone into the water and heard the beautiful whale calls and song, I felt amazed.

One thing I struggled to avoid was capturing a strange crackling sound, just like frying bacon. I’m told it’s the sound of sand and small stones washing up along the coral on the seabed. However as unique a sound it was, it did limit our whale recordings somewhat. We did apply some noise reduction to this in the edit. However we managed to capture around one hour of whales in total. They seemed to come and go, as if there was a distant playground a few Kilometres out to sea (I’d estimate maybe 3km away) but the sound is as clear as I’d hoped. I’m no whale expert, so maybe if you are, you can take a listen and tell me how close you think they may have been.

I also would hazard a guess that some whales were young and some old, judging by the tone of the call, but again, if whoever is reading this knows better, let us know. If you want to take a listen, or download and use the free whale sound effects, you can here.

The boat we were out on had a 16ft fibreglass hull and a fairly hefty looking outboard motor. Stupidly I forgot to get the actual specifications. However from the minute I was onboard, I started recording. There are so many variations to capture, from stern, bow, side and close to hull recordings, to inside the cupboards, underneath the boat, dropping and raising the anchor and more. Also there were several different speeds to capture along with all these variations. I did my best to get as many as possible.

If you’re looking for motorboat sound effects, you can download our’s here.

In the next 8 to 10 weeks we hope to go out on a chartered whale watching boat and with permission, we aim to record again but this time much closer to the whales. We are also hoping that there could be some dolphins two record too.