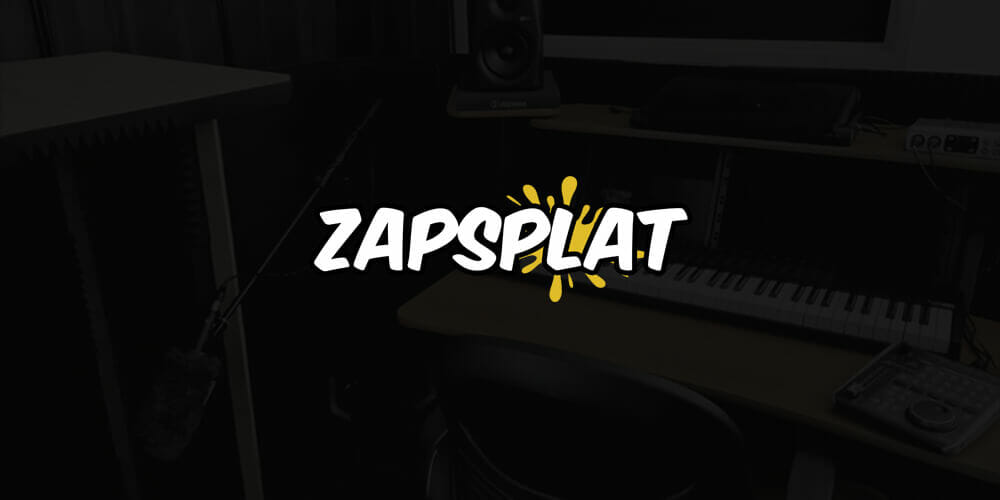 A typical day here at ZapSplat

I was recently asked by a member in our Discord community what a typical day at ZapSplat looks like, how do we create and record the sound effects for the library and manage time? I thought it a great idea to write this post about exactly that, but include a little personal information and business info too. After all running a sound library is a business and much of what I do is admin based. As boring as that can be, if anyone is looking for a little info on what it’s like to work in the industry, this is worth including. I’ll add to this post over time and include some more of the technical aspects of recording, such as tools and techniques.

A little back story

ZapSplat was born in 2015 and was the result of me wanting to get back into recording sound effects after a 2 year break. It all started in around 2004, after leaving my music production degree at university and working in a Pro Tools studio in London as an engineer. I found myself increasingly bored being stuck at a mixing desk and finding the creative side of some of the jobs that came through way more rewarding.

It was then that I came up with the idea to create a sound effects library. For a number of reasons this appealed to me. Firstly recording, the creative side of designing and recording sounds on location and also the fact that as a business, it was a great model. This was also back in the days where there were far fewer independent sound designers and field recordists working specifically for libraries and SoundDogs.com still ruled the roost. In fact there were just a handful of online libraries out there, a completely different landscape as it is today.

To cut what could be a very long story short, the business never really worked and I struggled to make a profit. This was largely due to a lack of business knowledge and also the high costs in paying developers to continually maintain the website. But I had also set up my first free sound library (www.freesfx.co.uk) as a way to funnel additional traffic to the main website and this in its own right was far easier to market and grow a user-base.

So for the next few years I ploughed my time into this free website and made some money, but not enough to live from and eventually after my first child was born, I decided to sell it and get a ‘real’ job. But the itch to get back into the sound effects world was too strong and in 2015, I took a huge risk, moved with my family to Australia and started working full-time on the newly created ZapSplat.

We launched with just 6,000 free sounds and a few ads on each page to help cover the costs. Fast forward to 2020, five years later with almost 80,000 sounds, 1.3 million members and growing.

A typical day at ZapSplat

So, just to be clear, currently ZapSplat.com is run by just me, with my wife handling the accounts and some of the other admin. But this leaves me to do everything else, so managing my time is something that I have slowly developed and now have a pretty solid routine that I use as a template for each day. However, having said that, each day can be completely different to the last. I might be on location or I might be recording in the studio. I don’t work for clients, just at my own pace, so i’ll run through a typical day below.

I typically wake around 7.00 am and the very first thing I’ll do is grab something to eat, a coffee and go for a surf. I’m very lucky to live right on the coast with a beautiful beach and some excellent surf. I’ll surf for an hour and return home by around 8am.

I have 4 kids, so the three younger ones we’ll walk to the bus stop for school while the eldest has already left. By 8.30pm I’m back home.

And we’re off. I jump in the car and start the 15 minute journey to the studio. However most mornings I will swing by a charity shop and check out what’s new in. I am looking for anything that makes noise, so it can be something old and squeaky, something that’s made of an interesting material I can manipulate into something else (leather can make great bird wing flaps, as an example) or something I can smash up… that kind of stuff that’s going to be useful not really for just one recording session, but that I can use again and again. I see my job as a little like a Foley artist, but not synchronising my work to a movie, just for the library.

By now I’m usually either at the office/studio, or out on location recording. More on that in a bit. If I’ve come straight to the studio, first up is to open my emails and go through the customer service requests that came through overnight. Being in Australia means the busiest time for ZapSplat is while I am asleep. That means I usually have around 20 emails to answer each morning and sort out whatever is required. This can take anywhere between 30 minutes to an hour. 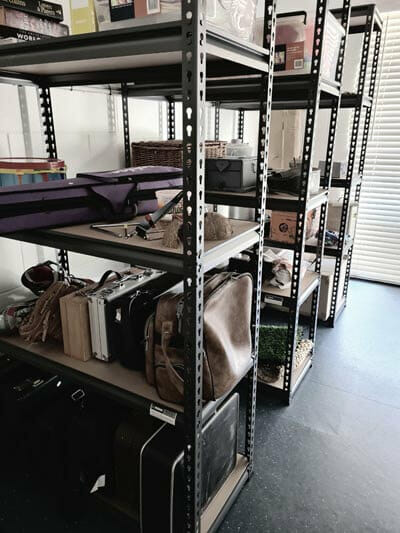 Typically by 10am, I’m setting up the props I just purchased or working on recording the ideas I have planned the day before or even few days before. I have several microphones and recorders I typically use (here’s a list) and depending on what it is I’m recording, I’ll select the right microphone and record directly into Adobe Audition or if I’m using the Sony PCM D100, I’ll just transfer the files across to my Mac after recording.

I would normally aim to record between 100 and 150 sounds in a day in the studio. This could be from just 5 props, or maybe even 20. It just depends on what I am recording. If I am recording something like a leather case or metal tub, I tend to firstly record impacts, scrapes and movements, then move to surfaces. In the studio I have several surfaces set up (concrete, grass, soil, wood etc) so I can just record objects and surfaces in one acoustically treated space. It works very well. I often also pull those recordings into a plugin like Fracture by Glitchedmachines, Whoosh by Tonsturm, or another plugin. So often we can manipulate a simple recording into many others.

Recording usually takes between 1 to 2 hours a day depending on what i’m recording. So by around 11.30 am I have already got the raw audio files in Audition ready to be edited.

If I am working with contributor sounds, those tend to be edited with metadata ready to be added into the library. Sometimes I’ll process these into the library before I start working on what I have recorded, but sometimes I’ll do that at the end of the day. It all just depends on what’s involved. 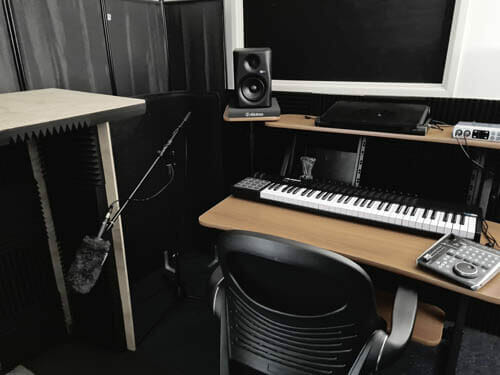 One of the smaller areas we record and edit

By now I am editing the sounds in Adobe Audition. This involves me trimming each take in a file, adjusting the levels, adding compression or any effects that are required and then adding metadata and saving each file. I work fast so my computer keyboard is set up with shortcuts for every effect or process I use regularly. For example N=normalise, P=pitch-shift, R=noise reduction, K=limiter/compressor, W=open new file… you get the idea.

I also don’t spend any time these days buying in new equipment and very little with new plugins and effects. The reason for this is that I have found personally it interferes with the creative process. I know so many creatives who obsess over equipment and spend half their time setting up gear, researching new mics or whatever else it maybe. Myself I prefer to create content and with the tools at my disposal, I can do a great job very quickly. I will of course buy new equipment if needed or plugins if some really exciting ones hit the market, but as a general rule, I have enough to use and work with.

Editing sound effects is the biggest part of my day. It would normally take me 3 hours to complete the day’s editing. By then I have a folder with all the wav files of the days sounds trimmed and ready to go. 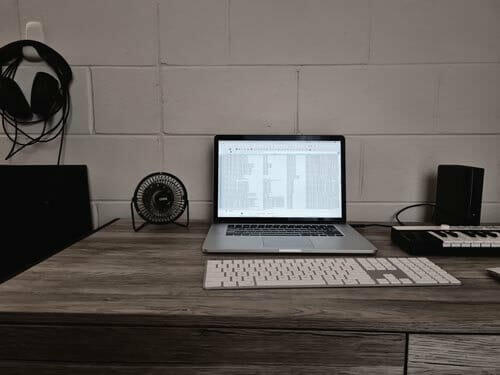 Data-sheets. This is the part of the job that many people hate but it’s a vital one to do and has to be done properly. Adding the metadata for each sound requires writing a description, tags/keywords, categorising them and any other data that’s required. Because I don’t sell my sounds outside of ZapSplat, I use my own datasheet template for each session. It’s not the most enjoyable aspect of each day, but it takes around 1 hour and then the sounds are ready to upload.

While writing your data-sheets can feel like a chore, it’s such a vital component of selling sounds through a library. Without good descriptions and keywords, your sounds will not easily be found by those looking to use them or buy them so spend the time on this part of your day, it’s worth it.

By 4pm I am usually uploading the sounds onto the servers and processing the day’s new sound effects.

At around 4.30 pm I am packing away any equipment used, tidying up the studio (I can make a massive mess when recording) and formatting any SD cards used ready for the next day, then it’s time to go home.

Once the kids are in bed and asleep, I typically answer emails again at around 9pm (although I answer them throughout the day as required), then start brainstorming the next day’s sounds. I will watch a few movie clips for inspiration on things to record or design and I might check out the new libraries hitting the market too. I also get a lot of requests for sounds so I have a list to work with. I cherry pick a few of these each day and record them too.

This time is dedicated to the community. So now we are using Discord, I’ll spend a couple of hours chatting to people, working with the moderators on new ideas for the community and answering any last emails that come through. 1 am is usually the time I try to get to sleep so I can get up at 7am the next day and do it all over again.

The importance of rest

One thing I have learned is downtime and rest is vital for being able to stay motivated and enthusiastic about what you do. It’s also crucial to try and maintain a healthy balance between work and family or social time. One or two nights a week I won’t work in the evening and I try not to work at all between 6pm and 9pm as that’s time with the family. I also do take a day off during the week every couple of weeks or so and just don’t work. I’ll do anything else, but just try not to work. Weekend daytimes are family time, but I must admit I do tend to work Saturday and Sunday evenings quite regularly, until around 1am.

I hope that’s given some insight into a typical day. It’s not a technical explanation of the gear and techniques used because that would be a huge post to write, but as said I will add to this article soon.