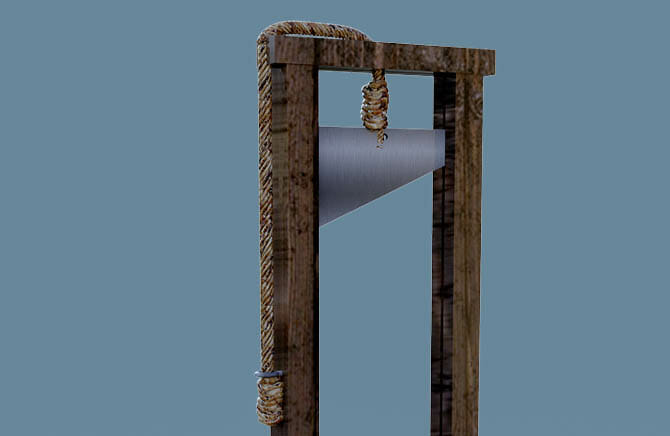 I had a request come in via email for the sound of a guillotine falling and chopping off someone’s head, a popular form of death penalty in France from the middle ages until 1977. However without access to a real one and also to create the horrible sound of the decapitation and subsequent head falling into a basket or on the ground, I needed to think creatively.

First up was the sound of the blade falling. If you’ve ever seen a guillotine, you’ll know they are wooden structures with a heavy weighted blade in the middle of two sliding sections. When the blade falls, I am assuming there was a heavy scrape of wood. Hollywood has a habit of exaggerating sound effects in movies, so if I were to go by this example, I’d include an over-the-top blade sound too.

I tried several techniques for getting the right sound. First I took some large wooden planks and slid them against each other, creating a range of different wood scrapes. However these didn’t work. Going back to the drawing board, I looked at some images of the real device and tried to think what operated in a similar way and made what could be a similar sound. I suddenly remembered the sash windows we had in our old home and luckily I had recorded them. The sound of the window shutting was perfect so a quick edit to get the right length and tone and the main drop was ready.

I realised at this point that I did need to add some form of blade or metal sound. Again I had to experiment with various objects from knifes and old metal poles and bars through to an axe I’d recorded the previous day. The axe sounded perfect when dragged along concrete so using a recording of this, mixed with the window closing, I had the base for the guillotine drop.

Lastly was the sound of someone’s head hitting the ground or basket. I wanted to use a melon for this, but not having one available, I used a full cabbage instead. Round the back of our studio is a back passageway with lots of dried leaves and plants. I simply recorded several drops and forced impacts on the ground. They didn’t quite have the heavy impact needed to sound like a head, so I had to boost the lower frequencies and also mix a harder thud sound with it to get the desired tone.

Finally, I had the desired sound. They are free to download as mp3 or wav here.