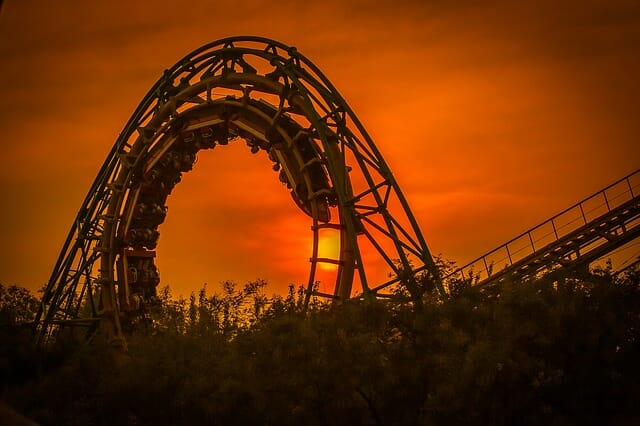 This weekend has seen me out and about recording in a few different locations. In fact, I came away with several new sound effects I am pretty sure many of you will find highly useful. Two of these locations offered sounds that were really fun, yet challenging to record. Theme park rides and helicopters…

I headed down to Movie World on the Gold Coast here in Australia with my children this weekend and as I always do, I packed a small Zoom handy recorder with me knowing that several recording opportunities were likely to pop up, which they did. While this isn’t my main recorder, I use it for chance recordings while I go about my daily business.

Movie World is a great theme park and a great day out. They have several large roller coasters and other rides which are also fantastic sound sources. One of the biggest roller coasters in the park is the DC Rivals HyperCoaster, which also currently holds the record for the tallest, fastest and longest coaster in the southern hemisphere, so I just had to record it.

I literally only had to stand at the bottom of the first dip for a few seconds before the first train of carriages whizzed past, which also conveniently zooms past the main car park road right outside the park offering easy access.

I also managed to record a couple of other roller coasters and kids rides which can all be found here.

Eurocopter AS350 B2 Squirrel Helicopter

Down on the Gold Coast I came across a helicopter that was taking paying members of the public on trips around the harbour. Luckily for me, I was able to get right up close to where the helicopter lands and takes off. Armed only with my small Zoom recorder which has a Rycote windshield, I got nice and close and managed to capture some great recordings of the chopper. The wind that is generated from the blades is really powerful and my Rycote windshield was no match for it. But I managed to reposition for the second flight and gather some cleaner takes.

I have loads more sound effects to record and add to the library this week, so watch this space for more.