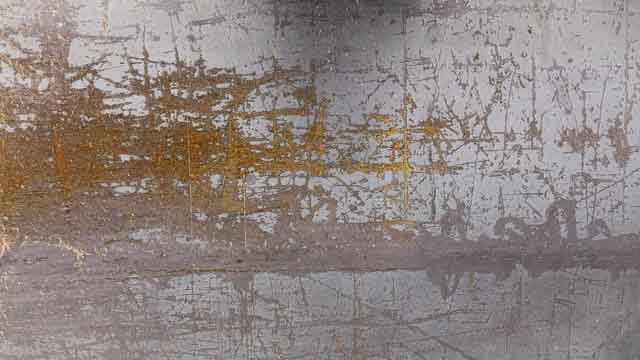 This week has started with a real bang, well more of a scrape. After a weekend of illness, today I had big plans to record some huge metal impacts among other sounds using some metal props I collected last week. I’ll explain more below…

I came across a large sheet of corrugated metal and managed to get it back to the studio. The plan was to throw it on the ground, up against some walls and throw other heavy objects on top of it to get some impact sounds. However I had to keep things slightly quiet as I was recording really early, so decided to keep the impacts for another day. But I was keen to experiment with some scrapes, so grabbed a small kitchen fork and got to work recording the scraping sounds.

I managed to record a large set of grinding sounds with a really great high pitched screech. Once these were edited down, I wanted to give the metal scrapes an even bigger sound, so I simply pitched them down my 15 semitones in Adobe Audition and added a little boost in the upper mid and high frequencies to give the sound some brightness. I also added a very small amount of reverb and a little stereo expansion to give them an even bigger tone.

The larger scrapes would be idea for sounds such as the hull of a large ship scraping against the dock, or even for car crashes and other impacts. Go grab them free here.

I started these sounds last week and in my last blog post, discussed the reason why I was recording them. These were a request that came through. If you need the sound of a marker pen drawing and writing on cardboard, these will be perfect.

I recently was asked to add more cartoon voices and other vocal sounds by a member so today I recorded just that. These are my voice, pitched up significantly to give it a much more comical chipmunk style sound. I recorded several laughter sfx, some hiccups, some phrases and more.

I’ve another 82 new free sound effects waiting to be uploaded which I’ll do either later today or tomorrow. Today we reached 27,000 free sounds which puts us well on our way to 30,000!