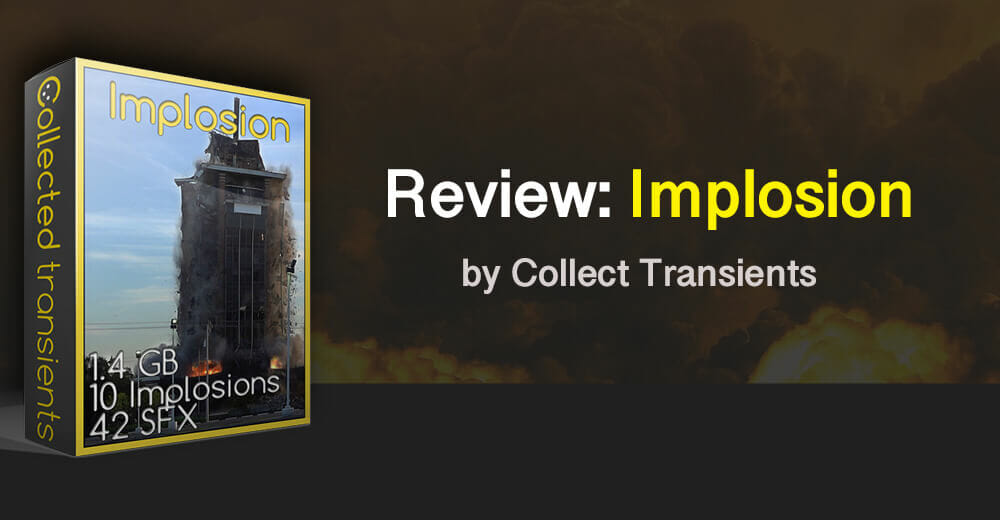 Stosh Tuszynski of Collected Transients has a well-established reputation for releasing innovative, evocative and unique sound effects libraries to inspire sound designers. You only need to look at the subjects of his previous releases, which include protest gatherings; spinning ballbearings and quarters around in balloons; driving hot knives into soap; molten metal; hail cannons; dangerous chemicals and large propane torches to understand that thrill-seeking and sound recording are definitely not mutually exclusive pursuits.

With a record like Collected Transients’, it seems obvious in retrospect that, having recorded things burning up and melting down, the next logical step was to record them exploding so Stosh took to the streets to record building demolitions. “5500+ lbs of explosives. 1+ million sq. ft of structure. 15,000+ miles” and one destroyed microphone later, ‘Implosion’ was ready…so I thought I’d check it out.  Here’s the demo.

Implosion features 10 unique building implosions recorded across the country. Each implosion is recorded with 4 to 14 channels of audio. To offer multiple perspectives, mics were placed as close as 50m (~150ft) and as far away as 600m (~2000ft) from the various explosive demolitions.

On listening to the library, it becomes clear immediately that ‘Implosion’ isn’t a standard explosion sound effects pack. It is a well-organised and curated set of unique, diverse and above all authentic sound effects. Helpful descriptions of the different perspectives in the library’s blurb quickly enable the user to understand what’s available and how to use it. This is a library with a tight focus and exhaustive depth.

Basically, this library consists of just two elements – explosions and debris. Thanks to the different perspectives and other factors though, the pallet of sounds this yields is still broad. There are thundering tales, rippling cacophonies, cracks, booms with plenty of punch, thumps, roars, whooshes and rumbles. There are wonderful rebounding echoes to some of the explosions and some of the perspectives go beyond a simple matter of varying distance to include, in one instance, a demolition recorded from inside a car for example.

As mentioned above, these explosions are authentic, which means they don’t have that cinematic, larger-than-life quality most people associate with explosions, but the quality of the sounds and the thoroughness with which they have been compiled means that, if Hollywood style carnage is what you’re after, you have a great deal of source material here to produce it.

One of the first sounds that really struck me when listening to the demo was that made by some of the debris elements. Rather than being a meticulously constructed cinematic illusion in which you can hear every brick and shard of glass fall, some of this debris sounds like what it is, a chaotic, all-encompassing whoosh. Instantly I thought of the swirling dust cloud a landing space-craft might make and how ideally sounds from this library could fit that requirement.

One of the things that I’ve noticed about sounds by Collected Transients is that they often sound like other things, which is great for creative sound design. Listening to this library, as well as apocalyptic dust clouds, I was reminded of firework displays, artillery and tearing or flapping heavy cloth. Many of the sound effects presented are sequences of explosions, which reminded me of stylised, larger-than-life marching feet. The rhythmic nature of some of these sections is such that these sounds might even have applications in certain musical genres.

As well as including multiple perspectives of the same building demolitions, ‘Implosion’ includes processed and unprocessed versions of each sound. The “edited” versions preserve the full dynamic range and are provided without volume automation or eq changes. The “processed” versions use compression and other processes to bring out all the hidden nuances – the debris is louder, some elements sit further forward in the mix etc.

I find all this really helpful. Having the option to tweak the raw sounds yourself or to start experimenting with some of the ground-work already done for you gives the library more flexibility and caters for users with different time constraints and experience levels. It also highlights things that might be overlooked if only the edited versions were provided.

It did occur to me that those with less experience working with sounds of the same event from multiple perspectives might appreciate a few helpful hints on how to get the most out of the library, especially given the unique nature of some of the sequences in particular, so I asked Stosh Tuszynski if he would mind sharing a few of his ideas. Here’s what he had to say.

I try not to direct folks too much on how to use my sound effects, but I could see these implosions being used in a lot of places!

In a more literal sense, there are some great single explosions throughout the library that would be wonderful layers for any sort of blast. Even the sequenced implosions generally have nice pauses with different sounding explosives, from small to massive! There’s also the debris element to the implosions, which is obviously useful in any sort of massive concrete/metal/glass rubble moment you’re presented with. This debris is especially present in the “processed” versions of each sound effect.

In a design sense, I feel like the rhythmic nature of some of the implosions could lend itself naturally to intense design sequences. I’m thinking those “inside the machine” type moments when the camera dives into an engine or some other mechanical device. Perhaps you could use the percussive implosions to design cinematic hits or reverse and process them to build tense transitions, the possibilities are endless!

The library is deceptively small, containing just 84 sounds that represent just 10 events. However Implosion is able to punch well above its weight thanks to the way that the different versions of each sound work together and, most importantly, the fact that each file actually contains multiple sound events waiting to be edited and processed however you like. It is, as Stosh mentioned above, a library full of possibilities, only a few of which have been mentioned here.

Given the year of flights, hotels, planning and effort that it took to capture these events so thoroughly, events that don’t exist nearly so comprehensively in any other sound effects library as far as I’m aware, Implosion is well worth the investment for any cinematic sound designer, experimental musician or anyone who wants the explosions they create to blaze a trail rather than follow an already well-established path.

Implosion can be purchased with an exclusive discount for ZapSplat users (using this code: ZAPimplosion30) from Collected Transients’ website.  Be sure to check out the other libraries there as well!