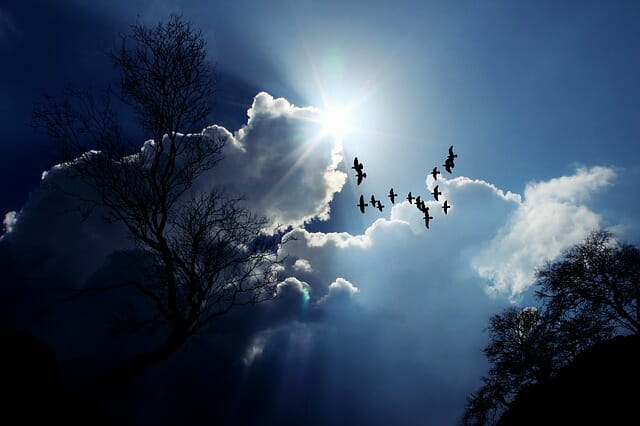 Just Do it: Keep on Keeping on

So much can stand between a sound designer or recordist and their creative goals. You may have a brilliant idea in your head, but factors such as equipment, experience, technical skills, self-confidence and environmental problems, such as unwanted aircraft, car radios etc, to name but a few, all conspire to make the road a difficult one. Understandably, this can make it seem very daunting

This series of articles will address some of these factors and what to do about them, if indeed anything can be done, but, if it can’t, perhaps nothing needs to be done. Perhaps, despite the difficulties, you should just do it anyway and see what happens.

If it Wasn’t for Bad Luck…

Sometimes, despite every effort to prepare, despite your best laid plans, a recording session just will not go as it should. When that happens, it can be tempting just to throw in the towel.

Four years ago or so, I was trying to record the dawn chorus while I was staying at my mum’s house. She lives out in the suburbs and the birds are particularly loud. It’s almost a prime location other than the nearby motorway, but when there’s a fair wind, it’s possible to get very good recordings.

It was…how can I put it…an eventful recording session to say the least and I wrote an article about the experience, which I shared with colleagues on an audio course I was taking at the time. I’m re-posting it here, in hopes that I’ll get a few laughs at my expense, but also hopefully to demonstrate the value of carrying on, even when you aren’t able to keep to the rules which constitute best practice to achieve a professional recording, you know, little things like monitoring your take and so on.

It’s perhaps important to understand when reading this article, that I’m totally blind and so telling one type of batteries from another can be a challenge.

My alarm is set for ten to four. As soon as I set it, my phone informs me, a little smugly, or so it seems to me, that there are two hours and fourty-eight minutes til it goes off as soon as it is set. Ah well I can go back to sleep when I’m done. It’ll be worth it I’m sure.

What on earth has possessed me to mess up my sleep pattern and rise at such an ungodly hour? The desire to step out into my mum’s back garden and get a good recording of this year’s dawn chorus before it fades away in just a couple of short weeks. Those who know me will be wondering why I should want to do this again, having already secured a bird song recording a couple of years ago at the same time of year from the same location.

The fact is, I’m a perfectionist. I’m always searching for a recording that tops what I’ve done before – with better gain staging, a lusher sound, better mic placement, a wind direction that doesn’t force me to put words like “urban” and “with traffic” in the sound effect file names etc etc. the trouble with birds is that they’re not like regular extras. You can’t tell them when to turn up, where to stand and for how long to perform. They sing what they like, where they like and for however long they like, not caring that, in order to construct a nice stereo image you’d have to stand in a flower-bed or point your mic such that the nearby motorway hits your right channel, thereby making the whole ambiance sound skewed. If you try to work around them, prima donnas that they are to a nestling, listening first to find out where they’ve decided to set up today and then moving as appropriate, they tend to decide suddenly that they prefer that tree over there or another garden entirely. They take particular exception to close micing so there’s plenty of room for trial and error and much value in creating multiple recordings as one may sound very different to another.

As I drift off to sleep, I’m feeling pretty confident. I tried recording the other day, which, in itself didn’t go very well – more traffic than bird song and all the birds situated just where I didn’t want them. However, the adventure showed me where the birds liked to sing and I’m pretty sure that, next time, I can position my mic far better so that I don’t get something in which the loudest bird is panned hard left and all the other birds are way over to the right. True, I could ask a friend whose more experienced with such things to filter the recording through a mid-side encoder/decoder again to correct the problems, and I probably will, but there’s no substitute for getting it right the first time.

I jerk awake. What time is it? Five past four! Without stopping to wonder why my smug phone has let me down I’m out of bed, throwing clothes on hoping that I will be out in time to catch the whole thing.

As always, assembling a recording rig reminds me of the military exercise where soldiers see how fast they can disassemble, clean and reassemble their weapons. Needless to say, the more quickly you can do it, the more time you have for other things to go wrong and the more likely you are to be the early bird that catches the worm. I rank somewhere down in the Fred Cano’s army order of professionalism as far as this is concerned so I’m not hopeful.

By a miracle I’m out the door with recorder, headphones, stand, zeplin and wind-screen all assembled. The sounds which I thought were distant birds coming from the other side of the house were actually coming from the bathroom radio as mum got ready for work. I haven’t missed a thing, it’s a still, calm day, the best kind for dawn choruses and the drone of motorway traffic is at least half as loud as it was before. I have everything pointed the way I want it so it’s lights, camera… Nothing. Not a sausage. No comforting hiss from the terrible headphone amplifier, (I don’t seem to have much luck at my monitoring stage), absolutely zip. Frantically haul the recorder out of its case, open the battery compartment and, sure enough, the embodiment of professionalism that is yours truly has put some of the batteries in the wrong way round. It actually takes me two passes to get them all because of my haste and the fact that I’m sure I couldn’t have been so stupid as to put more than one or two the wrong way round. How wrong I was! Incredibly, with that done and the battery compartment back in place, the birds still aren’t up so it’s lights, camera “beeeeeeeeeeeeeep, beep. beeeeeeeeeeeeeep, beep.” My headphones ring to the sound of my Fostex’s beeper telling me that, if I want it to do a decent days work, I’m going to have to give it some batteries that actually have charge in them.

Suppressing my frustration and puzzlement, (the batteries I put in should have had a full charge), it’s back upstairs at top speed to get another set. Putting them in with the best compromise between speed and diligence that I can manage, I find that they’re dead as well. How is it that two sets of batteries that I was careful to charge are dead? Simply because this lot aren’t actually rechargeable.

I store all my batteries in various compartments of my laptop case. Being keen on recycling, I also had to store some dead batteries in one of the pockets prior to taking them to a supermarket bin for recycling. Unfortunately, I had forgotten which pocket contained which set of batteries and the number of dead batteries just so happened to be that which the Fostex Fr-2 needs. Back upstairs again, more batteries hastily inserted. (Fortunately I haven’t quite made time for the supermarket trip yet. I can hear that the birds have well and truly started now and small wonder. Never mind, maybe I can still salvage something. With this set of batteries I should have two hours of possibility stretching out before me. So it’s back into the garden to find that Mr. Blackbird is perched in a different spot. Hastily moving the stand and hoping he doesn’t fly away, which he doesn’t, hooray! Lights, camera… “beeeeeeeeeeeeeep, beep. beeeeeeeeeeeeeep, beep.” These batteries are definitely rechargeable and were definitely charged up by me. At least the machine doesn’t die at once so I resolve to record what I can before it dies in hopes of being able to salvage something, before going to get my final set of rechargeable batteries in hopes of capturing a post-dawn chorus garden ambiance, which will consist largely of shrill sparrows.

The strident and relentless beeping in my headphones means I can’t monitor what I’m doing, both because I don’t want to risk the mic, which is always sensitive when you don’t want it to be and deaf when you do, to pick up any leaking sound, and because it’s so much louder than what is coming into the mic. I’m able to make one desperate adjustment to the mic to try and get the action more centered and that’s it. A tap on the mic stand to signal the take has started, turn the volume right down and use the headphones merely as a means of knowing when the batteries have finally died.

Doves coo loudly, all hard right of course. The blackbird appears to spend most of the precious time I have not singing but eventually the quiet click in my headphones means that the fat lady has sung and it’s all over, as far as the dawn chorus goes anyway.

I walk the route back to the house, which has already been surprisingly well-trodden for about half past four in the morning to get my final set of batteries and it’s not until I’m almost back outside that I discover the very last blow has fallen – the eighth inch to quarter inch headphones adapter, which was never very reliable to begin with, has finally broken. The top has come clean off. Since it’s the only one I have with me, that’ll be all for today’s recordings.

2. If it can go wrong, it will go wrong. This applies every bit as much to audio work as it does in the military.

3. The next investment I need to make is in some NP1 or eco-charge batteries, after I’ve bought some pads for a recording I hope to make next Monday that is.

4. Keep on keeping on. I was about ready to turn it in as a bad job after the first battery change. I persisted and at least managed to get something, which, if not the dream sound I was hoping for, still scrubbed up very well. Despite not being able to monitor the recording, so that I couldn’t even be confident I had the microphone pointed quite correctly, despite not being able to capture nearly as much as I wanted to, I finished the morning with two good ambiences and here they are.

5. The next concept I really need to grasp is mid-side filtering to rescue recordings with a lopsided stereo image. Despite my friend’s efforts, it still hasn’t gone in.

6. Don’t put off trips to the supermarket to get rid of useless clutter in the form of dead batteries and, last but not least.