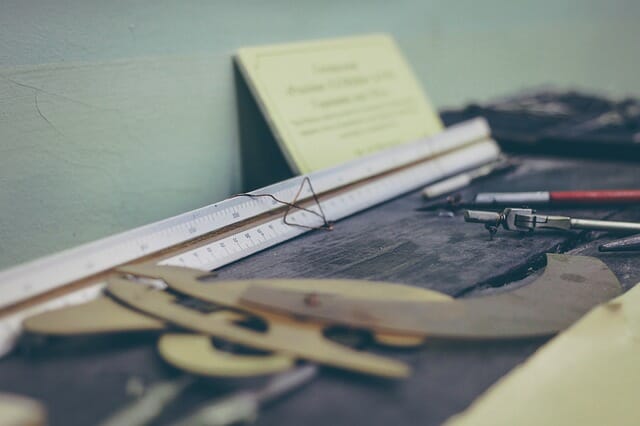 It’s been another very busy week and I’ve just spent the entire day editing down a large batch of new sound effects. In fact there were so many, I’ve not managed to finish them all, but will do so on Monday.

I had several requests come through so have spent the week trying to catch up, which I mostly have. I also went on a trip to my favourite dollar store to make some purchases for Foley recordings. Below is some more info.

I came across this rather cheap and cheerful geometry set in the dollar store but quickly realised there were several sounds that it would help produce. Inside the plastic case was a set of set squares, a 15cm ruler, eraser, pencil, pencil sharpener and a compass.

When you work with sound on a regular basis and have to find sounds in everyday objects, you get an eye for what will work. This set immediately appealed for a number of reasons. Firstly there is the plastic case the items come in. I recorded this being opened and closed, being set down on various surfaces and finally me applying pressure to it and recording the stress creaks that resulted.

If you’ve used our cartoon sound effects, you may have noticed we’ve a large selection of boings, springs and twang sounds. These are very popular and one of the main ‘instruments’ in creating such sounds is the humble ruler. By simply hanging a large portion of the ruler end over the edge of a table and flicking it, it produces the well known twang sound. Most of you will likely have done this at school. These sounds are great for cartoon jumps, springs etc and also for things like arrow impacts.

Finally I used the small spike on the end of the compass to scratch several surfaces. Many of these haven’t yet been uploaded, but they include scratches on carpet, a mattress, wood, metal and more.

These were a request and while we have many marker pen sounds already (writing, drawing etc) this type of pen was specifically requested. I purchased a pack of 4 from my local supermarket and set about recording them being used on paper, wood, plastic and also some plastic packaging. There really isn’t much more to say on these, but should you need them, they’re in the library.