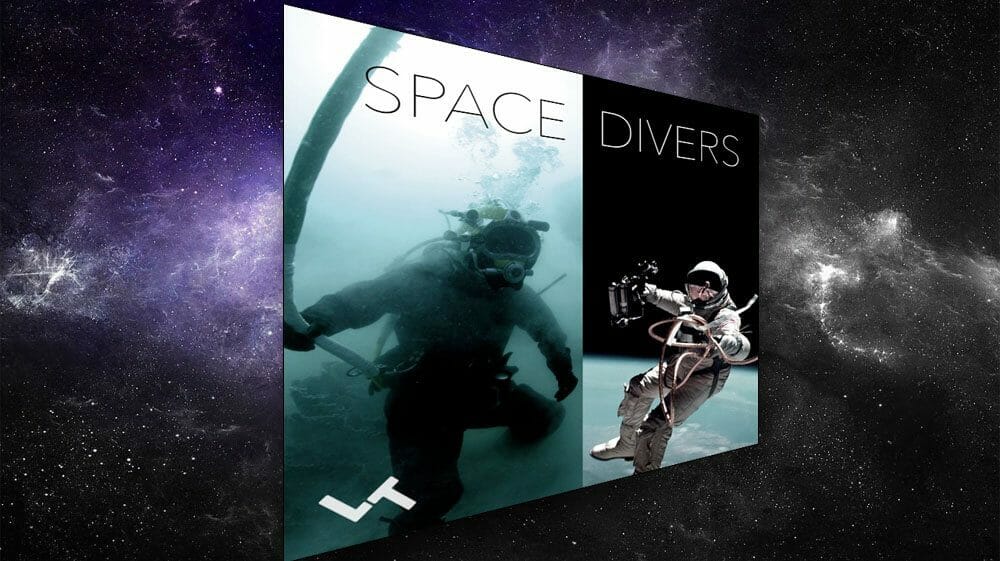 Not very long ago, we introduced a new contributor, Lukas Tvrdon.  Well he’s back already with 49 new and very interesting sounds to add to our collection, which can be downloaded individually or in one themed pack for convenience.

The title of this pack is ‘Space Divers Mini’ and is a sampler of his larger, commercially available library, ‘Space Divers‘, which can be purchased by itself or as part of The ‘LT Underwater Bundle‘.   This, however, is a sampler with a difference. Rather than simply comprising a cross-section of the sounds from the larger library, this pack features unique variations of the sounds that you’ll find in Space Divers, meaning that, even if you purchase the full library, the mini pack won’t lose its value.

How do you dive into space anyway?

The ambitious purpose of the ‘Space Divers’ packs is to simultaneously provide sounds that could be used in underwater and interstellar contexts. Normally, we think of sound as traveling from its source, through the air to our ears. We have very definite expectations for how such noises will sound. However, sound can also pass through liquids, which is why we can still hear things underwater, and, in space, you can only hear the vibrations of things with which you are in direct contact because sound cannot travel in a vacuum, but it can travel through solids. As sound is propagated through these alternative media, even the most mundane of noises takes on very different and interesting characteristics and it is these characteristics that ‘Space Divers’ attempts to capture.

Space Divers comprises over 1000 sounds packed into 367 files in 12 categories including, breathing, footsteps, three impact categories, three underwater categories, two vehicle categories, mechanical manipulations and tools. Many of these categories are represented in the 49-sound mini pack, but one thing the mini pack has that the larger pack does not is a batch of underwater ambiences, which is a nice addition.

We can offer you three underwater ambiences as part of the ‘Space Divers Mini’ pack, one under the coral sea, one near an offshore platform and this one of an iron sewer.  These aren’t too loud and so sit nicely in the mix without the need for too much tinkering. The three ambiences are very different from one another so there’s a good chance that there will be something here to suit the underwater environment you need for your project, especially once you factor in what a little added processing might achieve.

Then there are the underwater bubbles. The ‘Underwater Bubbles’ category in the ‘Space Divers’ library contains 14 files. There are bubbles made through metal, plastic and mud as well as textures ranging from sparse to intense. This descriptiveness is very helpful when picking just the right type of bubbles for your project. The three underwater bubble sound effects included in the mini pack provide a very good indicator of the kinds of sound you can expect from the larger pack and, since the sounds aren’t exactly the same, this is one of the areas where the two packs work really well together to afford you more choice to keep your bubbles sounding organic rather than recycled. Here’s an example.

One of my favourite categories in this library is the breathing. ‘Space Divers’ contains lots of different resonant breathing sound effects – someone breathing through a gas mask, in a helmet, using scuba gear etc. The texture of these sounds varies widely, making them really versatile. Also, a breadth of moods is captured ranging from calm through alerted to intense, which is a nice touch. Heart beats and the sound of someone choking round this section off nicely.

One thing the mini pack offers you, which the larger library does not, is a sound of someone’s breathing starting intense and gradually calming down.  The transition is believable and this is an excellent example of the way that effort has been made to ensure that the mini pack is similar but different from its big brother, thereby having value all its own, which I really like.

The versatility of these breathing sounds is highlighted by the contrast between this example and the previous one. This sound is big, bassy and has a metallic resonance. These breathing sounds could work just as well for space-suit breathing, scuba-diving or to represent someone in a hazmat suit. They could also be used as elements for monster sound design with very little effort. However they were captured, they work really well.

The mini pack boasts three underwater impacts that could be used for a monster floundering around or someone diving into the water from a submerged perspective among other things. This one is the punchiest, though the other two, being similar, allow you to build up to it.

The ‘Impact Underwater’ category in ‘Space Divers’ contains 24 files, many featuring multiple sounds. There are underwater torpedoes, bassy explosive blasts, swooshes similar to those in the mini pack and some Nautilus impacts that would be as home in the context of cinematic trailer sound design as underwater. There are also a few impacts from an above water perspective that sound very nice.

Sticking with the impacts theme, but growing more versatile, the mini pack boasts an impressive range of other impact types for its size that could work as well in space as underwater. There is a host of metallic crashes, booms and thuds of various sizes and with various stereo imaging from small ones to massive, larger-than-life, distorted, stinger-like effects. Check out this example, and this one too.

As you might expect, this is just the tip of the ice-berg as far as the larger library is concerned. There are mother-ship crashes, resonant armour hits and all manner of other juddering, rattling, tonal or thunderous impacts, as well as hits as mundane as a “bag tap”, all spread across the ‘Impact Material’ and ‘Impact Heavy’ categories. These impacts could provide the sounds for any number of activities including monster footsteps and hull repairs.

One group of sounds particularly worth mentioning here are the meteor shower sequences. They are impressive to me because of their apparent unimpressiveness. The thunks that are meant to illustrate meteor collisions are far from the most impressive impacts of the bunch. This works really well for me because space is such an isolating environment that you wouldn’t have to be very far removed from an event, even one that could pose you a significant risk, for it to sound relatively insignificant. This represents a far more realistic approach to sound design in space to that traditionally adopted by many film-makers, though, if you prefer space in your projects to still be a very noisy place, there are plenty of assets to make that happen for you as well.

Speaking of hull repairs, both libraries feature a number of “mechanical manipulations” as the title to the relevant ‘Space Divers’ category puts it. These consist of the vibrations from rummaging or fumbling activities. Coupled with the impacts already discussed, it would be possible to build very convincing action sequences very quickly. Here, we have someone fiddling with a handle.  ‘Space Divers’ contains manipulated cable, buttons and other items. There are plenty of “click clacks”, which could be used for the sound of switches.

This interstellar/underwater Foley category is further fleshed out in the ‘Space Divers’ library with a collection of footsteps on different surfaces. I have never encountered this kind of Foley in a library before and it really is very useful to have and an innovative idea. If your planet has no atmosphere, that’s no reason why you can’t communicate some information to your audience regarding its makeup, thanks to this library. We have footsteps on rock, metal, gravel, dirt and more. Some of these sounds might serve just as well to illustrate the activities of noisy neighbours in an adjacent apartment as the more exotic contexts for which they were intended. I’m reminded a little of the Off Stage Set by the Hollywood Edge, except that I like the resonances in this library better.

If, on the other hand, you are underwater, both libraries feature a collection of sub-aqua movements to bring your scenes to life. Different resonances are imparted to the various sounds so that you’re not just underwater, you’re underwater in a particular environment or at a particular depth. Compare these two samples, here and here.

What modern space or underwater scene would be complete without some kind of gadget or mechanism – a drone doing reconnaissance, a crew cutting through wreckage in search of some ancient artifact or survivors etc. The ‘Space Divers’ library has you covered here too.

We have the muffled vibrations of drills and grinders aplenty, though of course, they would do just as well in many cases as servos and motors. Some of these sounds are really characterful. I can imagine using one of them in a creature vocalization. This category makes a very useful addition to the library and is another of my favourites. It might have been nice to have the recordings of the tools as heard normally. That way, you could cut between perspectives as characters drilled through rock or metal in a race against time or whatever, but the value and uniqueness of the sounds isn’t at all diminished for that.

Lastly, both the free pack and the larger library boast an array of vehicle sounds. There are rattlings, judderings and other types of vibration. The mini pack offers two space shuttle sounds. The vibrations would make excellent sweeteners to vehicle sound design even if the action was taking place in a more conventional setting. This vehicle sound is particularly characterful.

The ‘Space Divers Mini’ and ‘Space Divers’ packs compliment one another very well. If your project needs your characters to be able to survive without air for a while, with these libraries, it definitely doesn’t mean that your audience has to survive without sound. These collections have been put together with a great deal of thought and are highly nuanced, providing a wide range of sounds to suit a large variety of activities and applications as well as environmental contexts.

We would like to thank Lukas Tvrdon once again for contributing this excellent pack, available to download free here, which fills a role none of our other sounds do, and I highly recommend that you check out the commercial version of ‘Space Divers’ here.