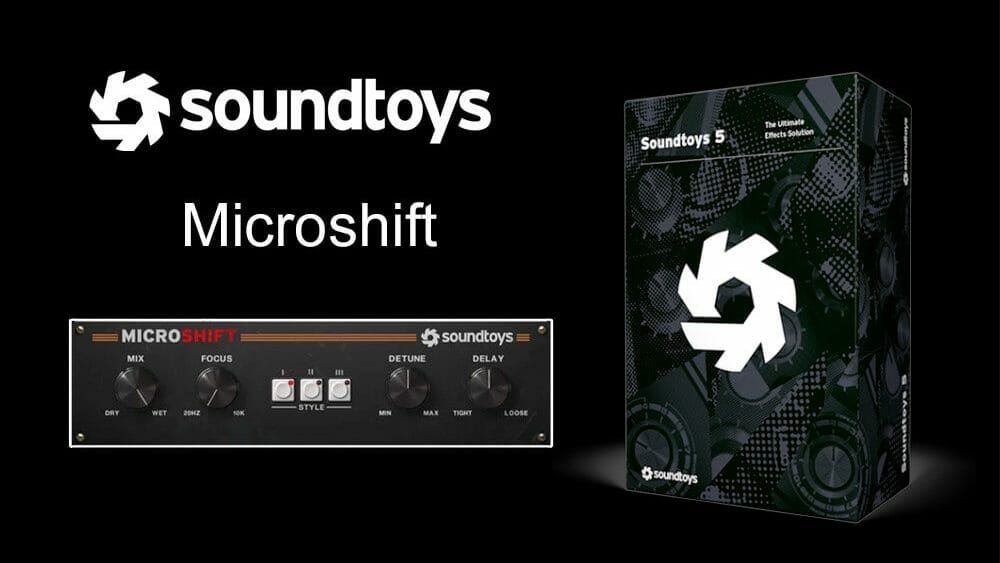 You’ve heard of “the Butterfly effect”, the idea that if a butterfly flaps its wings somewhere, a storm might be created somewhere else. This idea that really small changes can have really large consequences came to my mind when I sat down to review Microshift, a pitch-shifter from Soundtoys with a difference.

Soundtoys has created some highly configurable plugins with parameters to suit every occasion. I’m thinking of offerings such as Phase Mistress, Echoboy and Temolator, but sometimes less is more and, if six controls are all you need to get the job done, Soundtoys sees that six controls are all there are to keep things simple, uncluttered and above all, intuitive. So the plugin is little by name and little by nature, both in terms of its appearance and its effect. But what exactly does it do?

Although Microshift is a pitch-shifter at heart, that’s not the effect you hear when you listen to something that’s been fed through it. That’s just the butterfly as it were. Microshift applies a tiny delay and pitch offset that varies over time to each channel of your stereo audio and this simple trick has the effect of blowing a mono source wide open so that it fills the stereo field without cluttering it. That’s the hurricane part.

The simple ‘Mix’ control does exactly what you might expect, i.e. blends the processed and unprocessed signals. However, here it acts as a stereo width control, assuming you’re feeding Microshift a mono source. At 0%, only the dry, i.e. unprocessed signal is heard. When the control is set to 100% wet, full stereo width is achieved.

The ‘Detune’ and ‘Delay’ controls adjust the offset in pitch and time between the left and right channels of your audio. These controls are adjustable between 50 and 200%. Experimenting with these controls offers a wide range of permutations for your sound. This number of permutations increases dramatically when you factor in the ‘Style’ parameter.

The ‘Style’ parameter allows you to change between three different processing algorithms modeled on presets from the hardware unit on which this plugin is based. These affect not only the pitch-shifting algorithm and the amount of delay and de-tuning variation possible, but also the characteristics of the saturation that is also applied to the signal, meaning that you get warmth as well as width. There is also an input gain control to allow you to adjust how the signal is saturated.

Finally, the ‘Focus’ control offers even more flexibility. This parameter controls a two-band cross-over filter. Microshifting is only applied to the higher of these two bands. Say you’re widening a very rich sound, a melody played by a brass ensemble perhaps, you could widen the crisp highs while leaving the bass element solid and centered. This parameter ranges from 20 Hz to 10000 Hz.

The thing to be careful of when using this plugin, if it’s something your project requires, is mono-compatibility. When you’re listening to your audio in stereo, it may sound one way, but collapsing the stereo image to mono again after the plugin in your signal flow may result in a rather different sound owing to possible phase issues that might crop up. Why bother collapsing a signal to mono after you just went to the trouble of making it beautifully wide? Not all your listeners may hear your content in stereo. Many smart speakers are mono for example. ;However, because of the range of variation available with this plugin, as long as you know what to watch out for, you can be pretty confident of finding the trade-off between stereo width and a uniform listening experience for all to suit your needs.

Sometimes, the sound you get when you collapse the stereo field of a microshifted signal at mono-incompatible settings may be exactly what you’re after, particularly if you’re looking to create an interesting sound effect. Sound designers often get the best results by bending a few rules.

Let’s take a humble filter sweep. Here’s some white noise fed through a sweeping, resonant, low-pass filter, first the original mono version, then a widened version, then a collapsed version…

Clearly the collapsed version sounds very different to the widened version, but no-one said we had to keep the widened version. To my ears, this altered sweep sounds interesting enough that it might be useful for something. Of course, it’s mono again, but we could always re-widen it, either with another instance of Microshift or another process. In fact, stacking multiple instances of Microshift in series adjacent to one another or either side of processes to re-collapse the signal to mono, especially if we use Microshift on different settings, may produce a very unique sound.

This is the kind of plugin that really lends itself to easy-going experimentation. The plugin isn’t so input dependent that the results it gives will differ widely depending on the source material and it doesn’t have a maze of parameters in which you might get lost. All that is required is to listen and twiddle a few knobs.

You might try adding Microshift to a send with a delay or distortion on it, so that only the effect on the send is widened. And, of course, there’s always automation to experiment with.

The last thing to mention is that, if things weren’t already simple enough, Microshift has a little brother – Little microshift, for situations when you might want to just set and forget. This slimmed down version simply has the ‘Style’, ‘Mix’ and ‘Input Gain’ controls.

Accessibility to the Visually Impaired

All aspects of this plugin are accessible except the presets. Given the plugin’s ease of use, I haven’t found myself missing them all that much.

All in all, this plugin is delightfully simple at the back end, while producing a lot of variation at the front end. It’s fun to play with and great for making sounds seem bigger, and more panoramic.

By far the best value way to get hold of this plugin and its little brother is to purchase the Soundtoys bundle, available here.