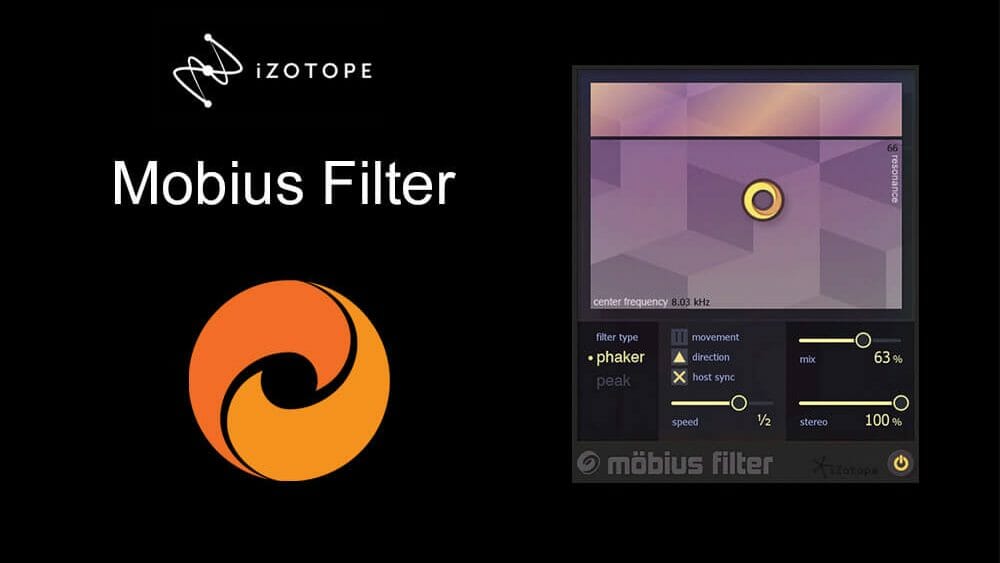 Mobius Filter by Izotope: a review

Named after the mobius strip, a 3-dimensional shape with only one side and one boundary,  Izotope’s Mobius Filter is an interesting, inexpensive and simple to use plugin with lots of potential for sound designers.

It creates “infinitely ascending or descending filter sweep”. This doesn’t mean that the filter sweeps continue to rise beyond the range of human hearing, which would be of little use. Rather, it means that the filter sweeps swell up or down from there starting point and then start again without reversing the sweep’s direction. This effect is based on the concept of the Shepard tone, an interesting psycho-acoustic phenomenon that gives the illusion of circularity or infinite ascent and descent in a sound and is the audio equivalent of the Barber Pole Illusion.   Here though, as mentioned above, the concept is applied to filter sweeps instead of pitches.

Find the sweet spot for your track quickly and fluidly, to push to extreme heights or add subtle hints of motion. Create fresh filter effects for any genre, massive filter swells, psychedelic alternatives to flange effects, or fresh inspiration for adventurous soundscapes.

Depending on your preferences, your audio can rise or fall at varying speeds for complex, but easy to achieve spatial movement.

Yes yes but What Does it Sound Like and What can you Do with it?

The sound Mobius Filter produces when you first open it reminds me of the sound you get when you use a frequency shifter with the dry/wet mix at 50% and shift by very small amounts, especially if it has a feedback control and you turn that up high. The difference is that you can configure this plugin in ways that you can’t configure a frequency shifter. Here’s its effect on a drone using default settings…

As you can hear, the effect is very striking and distinctive. This effect could certainly be used whenever you wanted to represent a vortex, something spinning or a disorienting or mind-altering experience.

Sometimes, though, a distinctive effect isn’t what you’re after because, if over-used, it becomes instantly recognisable as what it is.

If you feed a constant sound into a plugin producing a constantly cycling effect, that effect is easier to recognise. If, however, the sound isn’t constant, we can impart interesting characteristics to a sound without leaving a tell-tail finger-print of the process that done it, even without manipulating the effect’s controls.

Here’s a simple cartoon water drip sound effect, which I have looped to simulate a dripping tap or something. I have been careful to ensure that the frequency of the drips differs from the speed of Mobius Filter’s filter sweeps to ensure the two aren’t in sync so that the pattern produced will be more interesting and organic. Here’s the drip loop, first dry, then with exactly the same settings applied in Mobius Filter as were applied to the drone in the previous example…

Where the dry section sounds like exactly what it is, a canned loop, the section with the effect applied has more variation and sound more convincing. If we automated the filter’s parameters a little or even the frequency of the drips by small amounts, the variation would increase. Now that we’ve seen some of the things you can do with Mobius Filter that cost little to no effort, let’s take a closer look at how it can be configured.

Three controls govern the speed of the filter sweeps. There is a ‘Speed’ control, measured in Hz. There is also a ‘Host Tempo Sync’ control and a corresponding ‘Speed’ control that allows you to adjust the filter sweep’s frequency in note values. This is extremely useful if you’re working on a piece of music or on some sound design for a trailer, not to mention the fact that working in Hz can often be a little abstract.

There are two other controls that allow you to regulate the progress of the filter sweeps. The first is the ‘Pause’ control, which, when activated, freezes the filter sweep in place. This is useful for accentuating different frequencies in whatever sound you are processing. You may find that, by experimenting with the pause control, you discover a place in the filter sweep that imparts some interesting characteristics to your audio that enrich it.

The second is the ‘Reset Filter Position whose function is self-explanatory, though it is worth noting that when you activate it , the transition from wherever the filter sweep is at the time you do so to the sweep’s starting frequency is abrupt so that there is a slight click.

This control is perhaps best used in conjunction with the ‘Pause’ control. Once paused, you can reset the filter’s position so that it is resonating at the sweeps exact starting frequency, which would be very difficult to find manually.

Adjusting Mobius Filter’s centre frequency also changes the nature of the automatic filter sweeps, but, for some reason, although this would automate smoothly when played through my DAW, after render, the results weren’t the same and seemed more jurky. This may well be a problem my end and I am investigating it. I will update the article with any further findings.

Earlier, we talked about the effect’s distinctiveness. This can be regulated, either by positioning the ‘Center Frequency’ control so that prominent frequencies in your audio are unaffected or by using the ‘Resonance’ and/or the ‘Mix’ controls. The ‘Mix’ control mitigates the plugin’s effect by allowing you to blend some of the unprocessed signal with the filtered audio. The ‘Resonance’ control affects the width of the filter. At maximum, this makes the sweeps sound very whistly. At minimum, the filter’s frequency response is much wider, affecting more of the audio at once but to a lesser degree.

As implied at the start of this article, you can reverse the filter sweep’s direction using the ‘Direction’ switch so that they descend instead. In conjunction with use of the ‘Pause’ control, this means that it is possible to freeze the filter at the highest frequency of its cycle, as well as at the lowest.

It is also possible to change the character of the filter’s sound by using the ‘Filter Type’ switch. This allows you to choose between a ‘Phaker’ filter, its default setting, and a ‘Peak’ filter. I’m not sure what the technical differences between these filter types are, but the audible differences are significant. The peak filter sweeps sound like something you would get out of a rich phaser using multiple stages.

Lastly, the ‘Stereo’ control gives a sense of width by adding a delay offset between the filter’s action on the left and right channels of the sound.

There are many ways this highly configurable plugin could be used to enhance one’s sound design. ;You could use it to add another dimension to a musical accent such as a notification as here, where the sounds tail is particularly affected…

It isn’t that the wet sound effect is necessarily better than the dry, but the second does convey something slightly different, a sense perhaps of something emerging, which may make it ideal as a pop-up.

One of the things I particularly like Mobius Filter for is to add motion and depth to drones and hums, particularly when it is used at more subtle settings. Some of the effects it can produce in this vein remind me of late 60s Doctor Who. The following clip gives some examples that vary in subtlety, first with the original sound, then with that sound processed by Mobius Filter…

As you can see, Mobius Filter provides a way to make oscillating energy fields and other pulsing effects.

Mobius Filter can also be used as a layer in sound design to enliven whooshes, risers, drops etc. The most common way to make cinematic sounds is to layer multiple sounds together. A technique I like to add to this is to layer plugins that have different characteristics.

This clip combines Two metallic impact from Zapsplat’s collection, reversing them both and sending the audio to a reverb to which Mobius Filter was applied.

This clip feeds one of Zapsplat’s glitchy impacts through a very useful plugin called Tapestop by Kilohearts and then processes the result through two different instances of Mobius filter, one after the other…

There are, of course, other possibilities. You could add Mobius Filter to a riser or swell effect, increasing or decreasing the speed of the filter sweep as the sound approaches. Using a similar technique, you could also enhance sci-fi pass bys.

You could set the speed of the filter sweep to syncronise to the length of a pitched ascend or descend and either have the filter sweep in the same direction as the change in pitch to enhance the ascend, or set the filter’s direction so it opposes the sound, which, depending on the settings you use and the sound, could add depth. If the length of your sound doesn’t conform neatly to the tempo of your project, find out its length in seconds and divide 1 by this number. The resulting number is the frequency in Hz you will need to syncronise the filter to exactly. There are so many possibilities.

This plugin’s parameters are fully accessible to visually impaired users. The only things that are more difficult to access are the presets and, unfortunately, the installer, which both take some know how to negotiate. Fortunately, Mobius Filter’s ease of use has meant that I don’t find myself missing the presets particularly.

Mobius Filter is a cheap, easy to use plugin that is light on your CPU. With a little creativity, it is possible to produce a wide variety of effects with it, ranging from the subtle to the distinctive, making it a good addition to any sound designer, game developer or musician’s arsenal. It can be purchased from Izotope’s website.