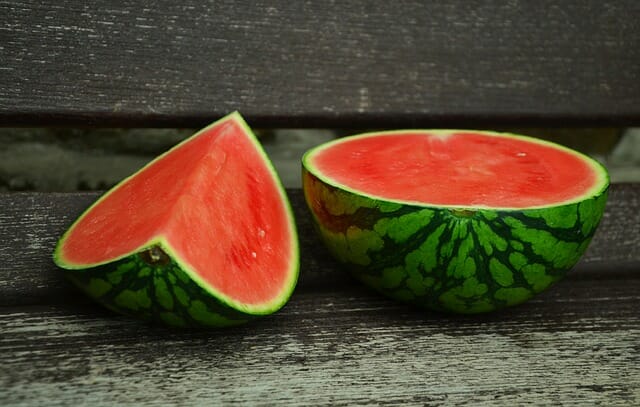 As always it’s been a busy few days here and I’ve been working hard on recording and designing new free sound effects for you to download. This week a few opportunities came up that gave me inspiration and also tools and props for new sounds, as you’ll read below.

I was out watching my children ride their bikes up and down the street yesterday evening when one of our neighbours came walking by asking another neighbour for a hand. She grows fruit and vegetables in her garden and recently has started to grow watermelon. However after seeing a lot of her crop being eaten by insects, she called on the other neighbour who knows a thing or two about this.

As they went to leave I invited myself along for a look, bringing my kids too. As it turns out, the only way to know if watermelon are ready is to pick one. So that’s what they did and unfortunately, it wasn’t ready. So I got to take the unripe watermelon home. They thought I was mad as I explained to them the fruit would make an excellent prop for all manner of sounds.

I set about using the watermelon first for watermelon sounds, then to smash it and use the flesh for lots of others. I dropped and rolled the watermelon recording several versions, then I found a brick and used it to smash the fruit hard many times, recording close up. Once the fruit was in pieces, I used the brick to record some hard fleshy impacts. All together from one watermelon I’ve just added loads of sounds including body impacts, fleshy wounds and more.

After a surf the other day I put my board down on the ground and it slid back, making the fins scrape along the concrete ground. This was a great sound so I recorded it. I also found an old bicycle bell in the garage, so recorded several versions of that ringing too. Not that interesting I know, but just saying!

Last night the local Facebook pages came alive with reports of a severe thunderstorm heading our way from northern New South Wales. The map on BOM certainly showed the severity of the storm, so while everyone else was hurrying inside, I was setting up my recorders and microphones and finding a suitable spot to record.

I sat for 3 hours watching the storm approach, getting pretty excited about recording it. However unfortunately mother nature doesn’t always play ball and the storm fizzled out a few kilometres away. However I did manage to record some great new distant thunder with light rain and wind sound effects. You can download them here.

I’ve got a few new locations for recording this week so hope to get out and record the last of the summer insects before we head into autumn here in Australia. However we’ve had some very wild weather and heavy rain this last few weeks due to a cyclone passing by out at sea and heading towards New Zealand. Only nature can control what’s going to happen so I’ll have to wait and see!