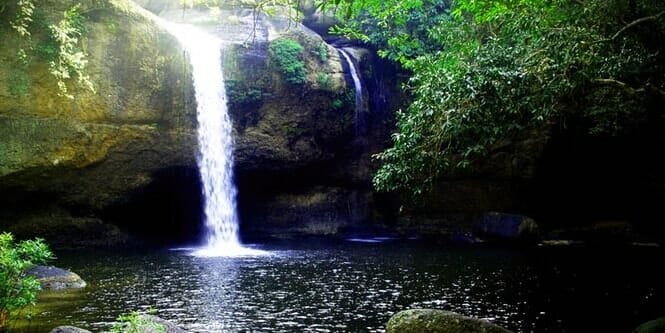 It’s been a rather wet week here in Queensland so that meant two things: there is plenty of rain to record and a fair bit of studio time to be had too. But I never let a bit of water spoil the fun and it just gave me lots of opportunities for new free sound effects. Here is a selection of new sounds recorded so far this week.

I just can’t resist taking time out to walk through the beautiful forests here and in doing so, there are always plenty of noises to be recorded. Heading to the nature reserve that is not too far away from my studio and home (about 10km away) I armed myself with my portable recorder and plenty of insect spray. One of the biggest problems with living where I do is there are loads of insects. Mostly it isn’t a problem but the mosquito are. But undeterred, I got to the top of the park right where two waterfalls are situated. Apart from a couple walking ahead of me, I’m alone which gives me a great opportunity to get some clean, isolated recordings of the falls.

The first is a low bridge that has a small fall and creak running right underneath. This gives the perfect platform to get close to the water without getting wet to capture some amazing water sfx. A short walk round and you reach a taller bridge that impressively hangs right over a fall of around 8 metres in height. I managed to get around 10 minutes of non-stop recording before the next people followed me down, not realising (or maybe not even caring) that I was recording and forcing me to stop for a break.

On the way back round I came across a viewing platform that gave a good view and recording opportunity of the creek and falls below, so I set the recorder up and recorded another few minutes here too.

You can go download and use these waterfall sound effects for free over in the waterfalls category.

I have a great little service bell I picked up from a cheap store locally a few days ago and I particularly liked it because it has the words ‘don’t panic’ printed on it. With four kids and a busy schedule, these words are pretty relevant. But the bell was recorded to capture the sound of a hotel reception desk bell. I captured several different versions, from single rings, multiple impatient style rings (perfect for the angry guest hitting the bell hard trying to get the attention of the receptionist) through to broken bell ringing, drops and place downs on different surfaces.

If you need this sound effect, you can grab them free here.

I’ve taken some time this week to also record different sounds inside a few cars. First was the sound my car windscreen wipers make when run on a dry, or just dried windscreen. I happened to notice this by mistake the other day but just had to record it. It’s a cool, loud rubbing squeak that probably can also be used as source material for some pretty interesting sound design.

Next up were more car doors opening and shutting, compartments, parking brakes and a few other sounds. You’ll find them over in the Car category.

I was asked in a request if I could provide some space bar key hits on a computer keyboard. I have a little Bluetooth keyboard that I’ve never recorded before so I used this to fulfill the request. But while I was set up to record, I also got some general tying sounds too which are free to use.

Lastly for today, I’ll mention the armpit farts my son has managed to master (we all did it). They are so loud I just had to record him making the noises and uploaded them. Just search for them to find them!

I’ve more free sound effects being uploaded this week so check the library for more in a day or so. As always, if there is something we are missing, let me know.