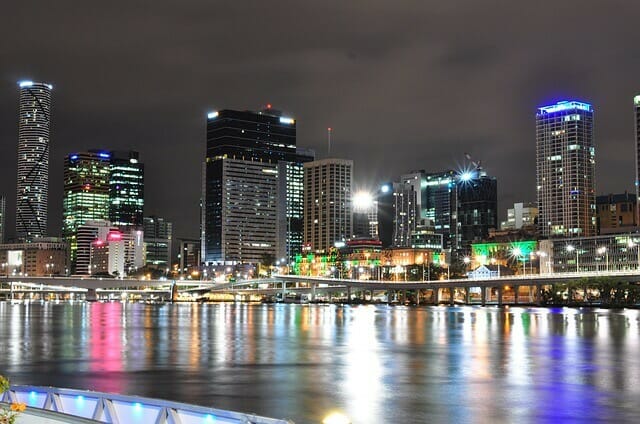 Everyone needs a break from time to time so when Alan fancied a get-away for a couple of days to Brisbane for a change of scene, you might be forgiven for thinking that he went for…well you know…a break. Turns out though he couldn’t resist the lure urban recording opportunities visiting Australia’s capital had to offer, so he took a binaural rig to capture some immersive ambience field recordings. Good news for us! There’s a wide variety of interesting sound effects here covering a fair number of locations that might be useful in a range of media projects.

If ever you’re doing a project that involves action in Brisbane, the descriptive file names should be a great help, since they go far beyond simply including the name of the city in which they were captured to include the street, bridge or square name quite often as well as the time of day at which the recordings were made. There’s one recording that features the cathedral, which is also mentioned by name. If, however, your project isn’t set in Brisbane or even Australia, there’s still a decent amount of stuff here that would be valuable to set the scene for any urban setting as quite a few of the recordings don’t include voices with discernible accents, having been captured in relatively deserted surroundings. These more flexible assets include, some traffic sounds like this one, which was captured in an underground tunnel, park sounds like this one, a quiet street with water fountain, an extractor fan hum,  ironically the cathedral recording  and more.

There are some sounds, of course, that have a very definite sense of place. There’s a clock tower recorded from two different perspectives that chimes 3 and 5PM. The 3PM perspective is particularly interesting because of the echoes.  There’s also a train station recording including announcements.

Also featuring announcements, we have recordings from inside trains in Brisbane. I’ve always been fascinated by the different sounds that trains in different countries make, even different parts of the same country, according to their speed, the age and type of the train, its fuel, the quality of the line etc. These train recordings particularly caught my attention therefore and, to my ears, they represent a subject that is complimented really well by the binaural microphones. You get a really nuanced sense of space. This recording’s great because of all the clicks and squeaks in different places around the carriage.

If it’s culture you want, there are various recordings of a museum, some busier than others. Again, the amount of data in the links is great because you can tell where in the museum it was recorded and the main features of the recording – that there is a child crying in one of them for example. We have the museum cafe and even its public toilet to round things off. For the bookworms and intrepid researchers, there are three recordings of a large public library that are very characterful, featuring the hushed tones you might expect and an industrious typist.

What really makes this collection stand out for me is Alan’s knack for bringing out something new in well-trodden subjects. There are a number of traffic sounds here for example. You may well feel justified in wondering “do we really need more traffic sounds?” But these are recorded from interesting perspectives and rich detail is given about the perspective in the file description. As well as the recording in the underground tunnel cited earlier, we have traffic passing overhead, motorway traffic at a slight distance juxtaposed with cyclists, motorway traffic recorded from a bridge and traffic stopping at a pedestrian crossing. This recording of a covered boardwalk, with its large number of passing cyclists, particularly struck me. It’s also nice to see a recording of pedestrians feature a distant busker, which enhances its character. Finally, there’s this recording that has a very interesting stereo spread, being recorded outside a park.

In short, if you’ve want to visit Brisbane, but can’t afford the air fare, this provides a brief but excellent virtual guided tour.