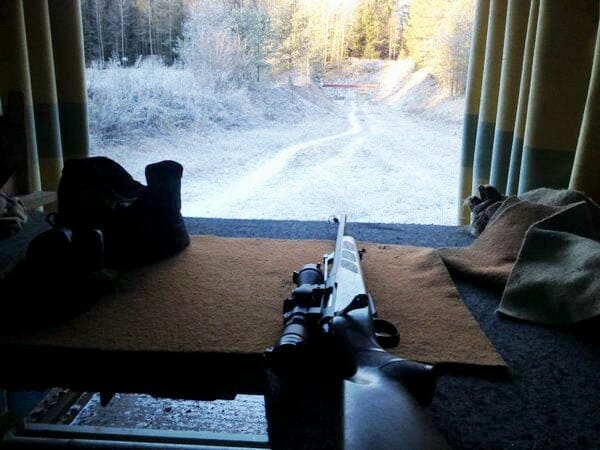 One of our fantastic contributors, John Ruok recently embarked on a recording trip recording the sound of a Tikka T3 Battue .308 hunting rifle. He has kindly shared his experience here:

A friend of mine bought a new scope for his hunting rifle (Tikka T3 Battue .308) and needed to zero in the sights. I thought I’d tag along with some minimal recording gear and set my first steps towards recording gun sounds. My intention was not to carry a car full of equipment and produce the best stuff out there, but rather just capture something that could be useful later on. 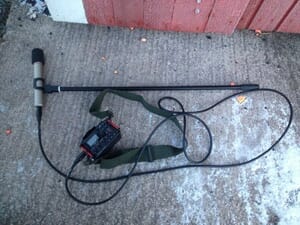 I picked up a small bag, packed my Tascam DR-60MK2, and AKG C1000s and off I went. I decided to pick up only the most important equipment that could be operated on the move. I also spent a couple of evenings reading up on good mic placements for condenser microphones and some settings to keep in mind for the recording session. One thing that was bothering me was that c1000s max SPL was rated at 137 and gun sounds can go above that momentarily (unsuppressed .308). One more problem was how to monitor recordings. I didn’t know if there were going to be any other people shooting their guns on the day, so decided using headphones while others possibly shoot was a big “no”. Gun range users need to wear decent hearing protection and closed headphones are not “decent”.

I arrived at the gun range one hour before we were allowed to shoot. I left my stuff in a warm car and let it cool down slowly for an hour before using. The temperature was -9’C and no wind whatsoever. I decided to power my recorder with actual batteries instead of the usual power block as I didn’t know how that would react to freezing temperatures.

My friend started to shoot three gunshots. I decided to change the recording level between shot 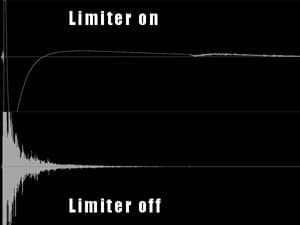 s and recording positions between scope adjustment so I could get at least one good “shot” per position. A good tip I read was to disable the recorder’s limiter. Setting the recording levels so that it would not peak resulted a very weak “thud” sound. Letting the highest peak clip resulted much more satisfying sounds. The shots that were recorded with limiter enabled were pretty much unusable because of how the limiter works in this unit. It works well on spoken audio but less so with gunshots.

Below is a picture of the microphone position. The only good sounds I got were from positions 3 and 4. Others had some weird stuff happening on them. Maybe the sound pressure was too much for the c1000s or the placement was just wrong because of resonating materials in the shed we were shooting from. Distance between point 1 to 2 is roughly three to four meters. 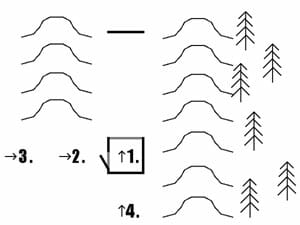 Afterwards I started to think how things could be improved and a couple things came up. I need to tinker some kind of thick furry DIY blimp. This might solve the problem of overwhelming sound pressure coming from the initial gun blast. Bringing more microphones (or even a stereo pair) and some microphone stands with me would be great too but that might cause a problem if there are other people at range. More gear attracts more people and there’s always someone walking closer and trying to see what’s happening while recording. Some people might not feel comfortable with wires going around shooting positions because tripping over while carrying a gun is potentially dangerous. Renting a private range was not really a practical solution such a small scale recording session.

Things I missed was to record some gun handling sounds. Reloading a magazine, operating the bolt, inserting and detaching a magazine, empty shell ejection and the ammo casing flying off to ground. These would be very nice to have around when designing gun sounds for a game or movie. Let’s see if I can fix all these for the next time.

You can listen and download John’s sound effects for free here.