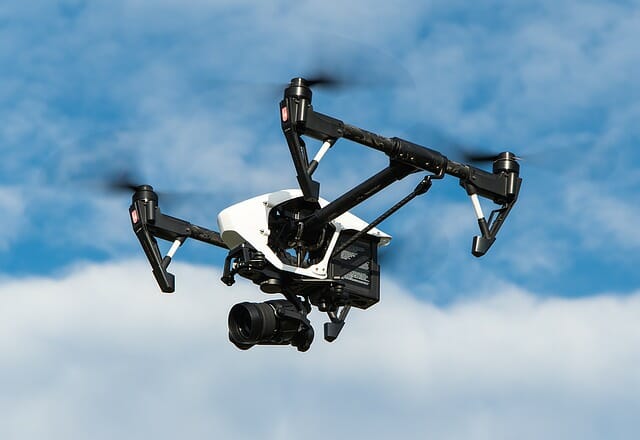 Drones, or UAV (Unmanned Aerial Vehicles) are becoming increasingly common in our skies. From hobbyists flying them in the local playing fields, to professional uses including construction, agriculture, sports, film and TV, security and much more, the small yet highly useful devices will surely be an increasingly common sight. With this in mind, we recently went out and recorded a mid-sized UAV in all its glory. Soon, we feel there will be an even bigger demand for drone sound effects.

So, to get a decent chance at recording the UAV in action, we had to find a location for suitable manoeuvring such as fly-bys, take-off and landings, hovering, flips and more. This obviously had to be an outside area, but also one that was large enough to accommodate these movements while offering low or no other sound sources and one that is safe to fly (there are lots of restrictions as to where theses devices can be flown).

Luckily our local sports field was the perfect location and there was no one else around. We chose an evening, so less chance of traffic noise and other unwanted interruptions.

Weather was another factor as we couldn’t fly in high wind, rain, thunderstorms etc). We actually were lucky and didn’t have to reschedule due to weather. We did however have a back up plan… we could record the drone in the sports complex as they have a large hall that was also not being used.

As always, it’s a great idea to get as many different positions for recording. This can be done with one microphone and multiple takes, or multiple pics set up in different positions. We opted for a few variations. We had a Zoom H5 with an AT825 plugged into the XLR inputs in a Rycote windshield that was handheld. This was used to record the movements as close as possible. We also had a Zoom H4 and H2 set up to capture distant and various other fly by recordings.

It was vital we captured a variation of sound effects, so we started by recording take-offs, hovering, lift-offs, drops, flips and circles. Then we recorded landings and crashes. Next up was pass-bys (the most fun part). Once the device was almost out of battery we recorded everything else. This included battery compartments, remote control buttons, beeps and dials, motors running dry and the device being placed down and picked up.

All together we recorded loads of sounds and we’ll be uploading them very soon!