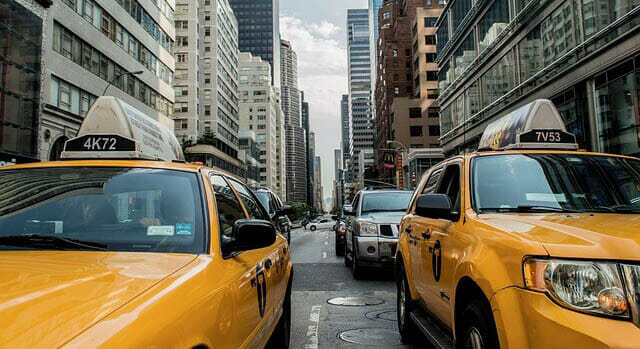 Back in around 1999, when I seriously started thinking about a career recording sound effects, I remember hearing the sounds of a major American city (mostly likely New York) on TV and being memorized by how loud everything was. Never having really been to any American cities, I wondered if they really did sound that loud, that busy and that buzzing. Sure, I’d been to London many times, but London just didn’t sound like that.

This blog post was inspired by some notes I found that I’d written about the experience, which I’ll highlight shortly.

It wasn’t until early 2002(ish) that I was lucky enough to get a return flight to JFK airport from my sister who worked for Virgin airlines and put me on her concessions list. All I paid was £35 in airport taxes, then had to be at the airport by 5am, to make sure I was able to be on standby for the next, or first available flight. My day actually started at around 9pm the day before when I made a terrible decision to drink too many beers and reminisce about old times with a friend. This friend lived close to Heathrow airport and allowed me to ‘sleep’ on his sofa so I could be up early and jump in a taxi. Luckily having no sleep enabled me to get to the airport with plenty of time and book in. I was also very lucky to get upgraded to premium economy, giving me a huge leather cushioned seat to relax into and fall asleep (after a few vodkas with the chap sat next to me)… I was a lot younger back then and had very few responsibilities.  Anyway, I could talk all day about the flight, but to cut a long intro short, it was the start of a very interesting and successful recording trip.

I had with me a Nagra Ares-M recorder, a small handheld device that was trying hard to become the industry standard and being star-eyed with the brand, knowing how renowned they were, I purchased one without much research. Having said that, they are amazing recorders, even if the standard mic capsule they came with sounded a little thin. I arrived slightly hung-over (still) and also very tired, but keen to get to the heart of Manhattan as quickly as possible and start recording. After jumping on a bus, there in the distance was the iconic New York City skyline, now missing the iconic World Trade Center towers, which had been destroyed by an act of terrorism the year before. still, the skyline was dramatic, standing tall above the smoke and smog from near-by industrial works.

Arriving in the heart of the city, I quickly made my way to the hostel to dump my bags, set up the recorder and get right to it.

Now this isn’t meant to be a long story of the trip, but really some non-technical mentions as to what I experienced recording for the first time somewhat under equipped and ill-prepared in this amazing city. So here are some of the observations I made a note of.

It didn’t sound like it does in the movies (not all the time, anyway)

Now this is a subjective point. I don’t watch TV and I rarely watch movies. Yes I have seen many a TV show and movie in my 39 years on this planet, but from personal experience, I expected the city to be full of horns, sirens, people shouting, trucks, firefighters blah blah. I know Hollywood has done a fine job at over exaggerating sound (off subject, but read this really interesting article about Hollywood and weapon sound effects) but this was legitimately the first time I was underwhelmed, for a while anyway. New York City has a distinctive hum, and if you’ve been lucky enough to visit a few world cities, I think you’ll know what I mean. Maybe it’s the scale and size of the buildings and narrow streets, or the way wind blows through the city, carrying the traffic noise and other city sounds through the air. I am not sure, but to this day, I remember that hum and how it has it’s own authenticity that no other city that I have visited has. Or maybe it was my hangover. There were moments of madness, when 5 police cars came screeching past, sirens blaring, or during rush-hour in Times Square, when some guy stopped in the middle of the street, forcing cars and cabs to angrily honk their horns. Those moments sounded just as I had envisaged, but for the rest of the time, it was actually a lot less chaotic that I imagined.

Recording with the Nagra wasn’t ideal, because it was windier than I expected

I love recording wind. In fact we have hundreds of free wind sound effects in the library. But I didn’t come to NYC to record wind, I came to record free sound effects of New York City. The pathetic windshield I had with the Nagra just wasn’t up to a bicycle passing by, let alone the wind I experienced those 2 days. Now again, maybe it was windier than normal, but, I remember coming back and editing the sounds down and realizing quite a few takes were lost to the low-frequency rumble of the wind hitting the microphone. If (no, when) I go back to record, I’ll be taking a Rycote windjammer and my Sennheiser microphones with me. But back then, all I had was the Nagra. New York sits right at the foot of the Hudson river, just a few KM from the sea. Those two days may well have been a little more blustery than normal, I can’t remember, but in future, I will always do a little more research into weather conditions before traveling to any destination.

I’ve recorded in many locations around the world, but I don’t think I have ever met such a great bunch of people, such a culturally diverse mix and also such an inquisitive bunch. This isn’t always the best thing… when recording, it’s often good to not draw much attention to one’s self. You just don’t want the question “what are you doing” in the middle of a take. With such a small device, I thought I was recording mostly incognito. However quite a few times, when anyone realized I was recording sound, they immediately came up to talk to me. Looking back, I now realize this was a city still reeling after such horrific events, a time when people really pull together and communities become strong and connected. But I will never forget just how friendly and helpful people were. One thing I love about my job as a field recordist is that you often come across genuinely curious people that you can inspire. I remember sitting in a cafe, waiting for my scrambled eggs, when the young lad, no older than 25 got chatting to me. He was suffering depression and felt like he was at rock-bottom. I discussed what I was doing and how he too could do find a passion, maybe even just a hobby to help him move forward. When we parted company, he seemed to have enjoyed our conversation and was going away to think. That was a really nice start to the day.

Back then, music and copyright in sound recordings was all new to me. I knew I couldn’t use a recording if it had music in it that was under copyright, but I wasn’t actually aware of it whilst recording. This comes with experience. I believe that after a few years of doing this, you kind of go into auto pilot when recording. Your brain subconsciously scans the audio landscape alerting you to any possible issue. I remember when I came back home, fired up my audio editor and got to work, I was pretty annoyed to discover cars passing with music blaring, music from shops, at the airport, on construction worker’s radios… the list goes on. We live in a world that is becoming increasingly noisy. The younger generations are getting used to constant audio and visual stimulation and I am not sure it’s a great thing. Not living in a big city at the time, I remember how exhausting all that noise was by the end of the day, but I am noticing it more and more, even in smaller towns. But anyway, back to the point, of you’re ever going to record, or use sound from a city, make sure any music in the recordings has been cleared for use.

It was exhausting, but as quite possible the catalyst for me moving full-time into recording audio. Much like when I got my first ever microphone, aged 16 in 1995 (a pressure zone microphone, or PZM) which I glued to a flat piece of wood and plugged into a portable mini disc recorder, something clicked and I become even more obsessed with sound.

All of the free New York City sound effects I recorded that day can be found in our City and Urban category, or found with a search.