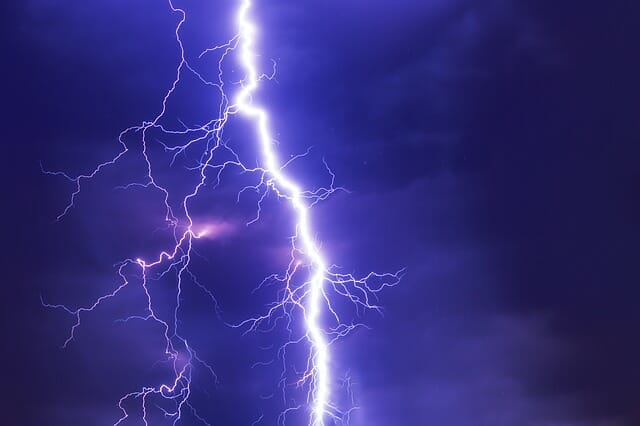 I’m from the UK, which means when we got a thunderstorm back there, it was a big deal. It didn’t happen often because the summers didn’t often produce the weather conditions for it. But when it did, it could be spectacular. The last time I experienced a summertime thunderstorm in the UK was late one Friday afternoon, just after picking the kids up from school. I was carrying my 3 year old son out from a fish and chip shop, quivering child in one arm, bag of soggy chips in the other when the loudest clap of thunder the UK has ever experienced happened right overhead. Inevitably I dropped the child, but managed to keep hold of the chips!

But seriously, that was the last big thunderstorm I experienced in the UK before moving to Australia, and then everything changed. Living on the coast of Eastern Australia, just an hour north of the city of Brisbane, we get our fair share of sub-tropical thunderstorms here from about October through to March. The last 2 years have been a little dry, especially this year when I think we’ve only managed 2 or 3 storms, however on an average year there are at least 10 or 20, making for perfect thunder recording conditions.

There are so many different types of thunder you can record, from distant and approaching, overhead, direct strikes, a vast array of rumbles and even the sound of static electricity rising, if you’re lucky enough, or unlucky enough to be in the right place at the right time, like our amazing contributor, Felix Blume (check this free sound effect of static right during a thunderstorm) you can capture some truly unique sounds. You can also capture it with and without rain, indoor and outdoor perspectives and more.

Things to think about before recording thunder

It can be pretty dangerous to go out recording in such weather conditions. We all know that lightning can kill. Not just from being struck, but also from strong, fast-changing weather conditions such as micro-bursts, trees falling etc. I once drive back from the Hinterland here during an intense, severe thunderstorm and there were huge branches from trees flying around, all over the road. I was pretty scared and not prepared.

Keep an eye on forecasts or join a Facebook weather watching group. These can be a very valuable source of advanced warning. I’m a member of the Higgins Storm Chasing Facebook Group  which is run by a very experienced and enthusiastic weather watcher and forecaster so I get advanced warnings of possible storms.

During summer months, keep a bag, ready to go with essentials. Waterproof gear, a phone, microphones and a recorder with suitable water protection are good examples.

Find a location that is away from other noises, unless that’s what you’re after. If you don’t want to capture the sound of cars, people, or city sounds for example, get in the car and drive to a location away from all this. I remember in the UK there was a valley in the South Downs which provided an amazingly quiet space to record, with a small barn I could use for shelter.

If you just want thunder sounds, get ahead of the storm. The leading edge of the storm is where you have the best chance of recording isolated thunder without rain. Once you’ve recorded without rain, you can get the sounds with rain.

Use a limiter. Not always required, but when recording unpredictable loud sounds, a limiter is useful to make sure any louder claps or rumbles won’t be recorded with distortion, or at least you reduce the risk.

Use pre-roll. If your recorder has this option, switch it on. Those unpredictable strikes of lighting and the resulting thunder can really be missed, if you’re not 100% ready.

When editing your thunder sounds, don’t discard the distant rumbles, or even the louder rumbles that might not be as impressive. They can be excellent source material for sound design.  Also, with some clever editing, even those takes that distorted can be used with some high-end and mid roll off and some reverb.

Most of all, stay safe and enjoy recording nature at it’s best. We have hundreds of free thunder sound effects in our library. They can all be found in our thunder and lightning category.