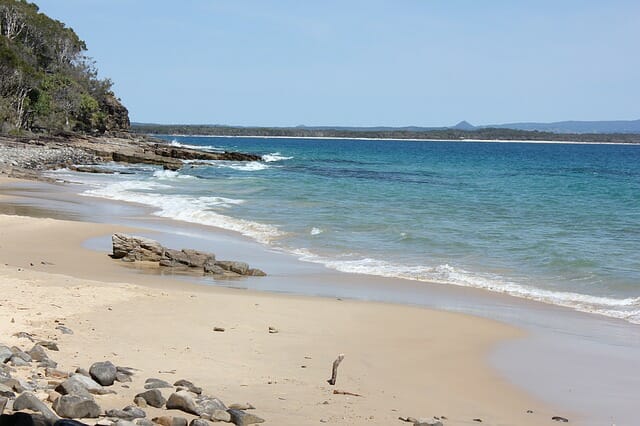 Probably one of the most famous places to visit at the northern edge of the Sunshine Coast in Queensland, Australia is Noosa Heads, a tourist hotspot and home to quite possibly the most beautiful National Park in Australia. The main town boasts amazing restaurants, bars, clothes shops and gift shops, some of the best ice cream in the area and much more. But I didn’t come for an ice cream, I came to record ocean sound effects.

I try and visit Noosa at least a couple of times a month, often just for pleasure but always with a microphone and recorder handy. Today’s trip out was specifically to capture ocean sound effects from the headland, a rocky and rugged coastline with quite possible the busiest car park around. I drove around for at least 30 minutes before finding a space.

With that drama out the way, I headed straight onto the headland and down to the craggy rocks below to capture the first ocean recordings.

I kicked myself when I realised my Sony PCM D100 with Rycote windshield wouldn’t be enough to stop the breeze from affecting the recordings. I should have brought with me one of my other microphones with a thicker windshield but I had to make the best of what I had with me. I found myself crouching down behind or to the side of large rocks to shield myself and the equipment from the wind to get useable recordings. This wasn’t a major issue, however later it did prove a problem when wanting to record some more distant ambiences of the surf, which was impossible due to the wind.

I did manage to get 5 or 6 good recordings of the waves (which were not massive for the area) approaching and breaking onto and over the rocks, some variations closer to and in rock pools and also some general beach recordings.

They are all available to download for free in our Ocean category.