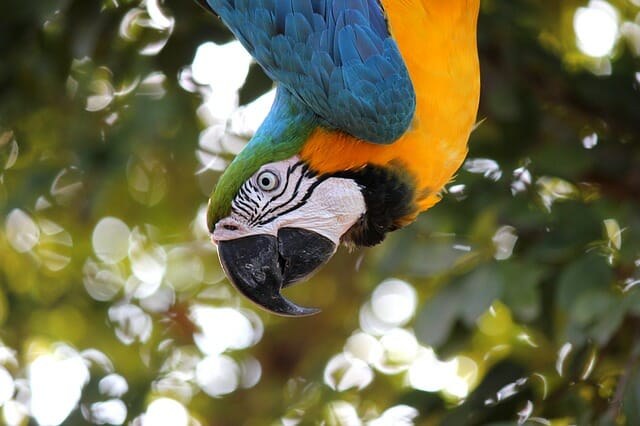 Last week I sent out several emails to local attractions and locations with the aim to source some new recording locations. One of them was the Maleny Botanic Gardens & Bird World, situated on the Sunshine Coast here in Australia. I was pleasantly surprised when I received a phone call back, almost straight away offering me the chance to go along and record early in the morning, before visitors arrived and even the chance to have an expert there to identify the birds and show me around. I eagerly booked in a session the following week, which was today.

I decided the best option was to take with me my Sound Devices MixPre 6 recorder, an AT815ST stereo shotgun microphone and also a Sony PCM D100 portable recorder. The idea being that I could use the MixPre 6 and shotgun to capture isolated bird sound effects and use the Sony for general ambiences.

Arriving at 9.30am, I was taken down to the aviary and introduced to a very welcoming team who were busy cleaning the aviary ready for the day’s visitors. I waited for them to finish up and for a kind lady to arrive who would be feeding the birds as I recorded. Unfortunately, there was a ride-on mower active in the park, close by which I wasn’t able to stop, so I quickly realised this noise would be a potential problem. Nevertheless, we got started.

The aviary is divided into 3 sections, one for doves and some smaller birds I imagine are more at risk from some of the larger parrots, an area for native Australian birds and then a larger section full of parrots and other birds from all around the world. I star 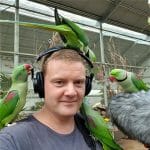 ted off by recording with the shotgun microphone in the quieter section. Here I recorded doves and smaller birds feeding. Next we moved through to the larger area with the parrots. Some of the birds here were full of character, including the 90 year old cockatoo called Harry, who followed me around for most of the day, asking me in his Australian squawk (yes, he had an Australian accent), ‘Harry wants water’. There were several other hilarious birds here too, including a small bird (I am not sure of the breed) that had some kind of foot fetish and managed to jump on my shoes every time I stood still and several Ringneck parrots. These were extremely friendly and tame and took any opportunity to land on me and the microphone while recording. Mid recording, while the parrots were investigating my ears, head and neck I suddenly lost signal in my left earphone. One of them managed to completely bite through the headphone cable, rendering the headphones unusable. I had no backup pair, so the rest of the recording session would be performed without monitoring.

Using the shotgun was preferable because of the mower noise, some planes that were flying overhead and also people, who by now had arrived and started a tour. I opted to continue to use this microphone instead of the Sony for this reason.

Next we moved through to the native bird section where I was greeted by several curious black cockatoos, more parrots and some very cute galahs, who seemed to want nothing more than for me to rub their necks the entire time. After succumbing to their demands for about 5 minutes, it was time to get back on with recording. I managed to get quite close up to some cockatoos and record their squawks, so much so that I was able to isolate any background noise and provide these as such. Living in Australia, we see and hear these magnificent birds all around us, normally late afternoon so it was good to be able to be up-close and personal with them. They have a very distinctive sound.

While in the aviary, several eagles and other birds of prey flew over, causing quite a stir. At this point all the birds made a sudden move to the other side of the aviary, allowing me to record the flock flying past, which was not only quite scary, but made for a great sound.

Unfortunately, most of the recordings did feature the mower, some people and other clunks and bangs from staff performing their morning cleaning duties, which means rather than getting some clean bird recordings, these have been left as aviary ambiences. But having said that, they are still extremely useful (if you’re looking for aviary ambiences) or with some simple filtering, can be used as tropical bird backgrounds, when mixed with other sounds to mask the mower and other background sounds in the mix.

The manager very kindly said I could return anytime, which I plan to do. Next time there will be a few things I will do differently. Firstly I’ll check if the mower will be present, and schedule around it. Secondly I’ll make sure to record only when other people are not on tours. This will be tricky, but will be worth the extra effort and thirdly, I’ll tape any thin loose wires away so that the birds can’t eat them.

I haven’t finished editing the files yet so they’re not ready for download, but as soon as they are, you’ll find them in our free Birds sound effects library.