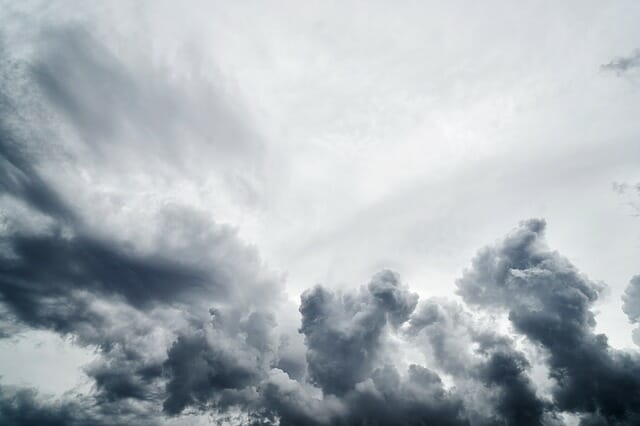 Sometimes a recording session just isn’t meant to be!

Yesterday was a day I’d had planned to go up into the rainforests here and record the atmosphere deep within the Kondalilla National Park. As some of you may be aware, I often record there and try to do so at different times of the year when different animals and insects make different noises. 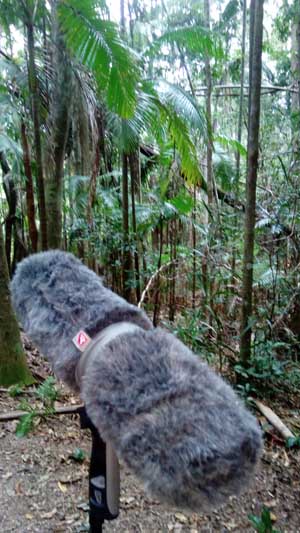 Being spring, it’s starting to warm up and all the cicada and other insects are slowing starting to come alive. Checking the weather I saw there was light rain forcast in the area at about 1pm, so I headed up at 11:30am with the idea being I’d record during the dry hour, then when the rain sets in I’d be back closer to the visitor centre area where there is shelter if needed. It all started well… I wandered down into the forest chatting to a few locals who were there to enjoy the scenery and atmosphere. However my initial recordings were ruined by a couple of kids who decided they’d walk through the forest with music blaring out of a stereo system. The music was so loud it took a good 5 minutes for them to move away far enough that the music was no longer an issue. However I then had several other people walking nearby and their voices could be clearly heard in the recordings. After a whole hour I had scrapped every take recorded so far and then started to notice small raindrops falling.

At this point I should have moved quickly back to the visitor area for cover, however the field recordist in me just couldn’t resist recording the beautiful sound of rain hitting the surrounding trees and forest floor. At this point two forestry workers walked past and I realised if they were moving out, so should I.

Then the rain came.

Probably slightly earlier than forecast, the rain really started to fall and I found myself deep in the forest, far away from the shelter of the visitor area. Initially the cannopy of trees above sheltered me from the rain, but soon the soaked leaves gave way and I was being drenched in rain water. As lovely as this sounds, I also had expensive microphones, headphones and a recorder to protect.

Yes, I was unprepared and also naive to think I’d be able to avoid the rain.

It took a good 20 minutes of walking in what can only be described as dense rain and I became as wet as if someone threw a bucket of water over me. My headphones were drenched, my microphone windshield was soaked and my audio recorder had shorted out, or at least it wasn’t working for some reason.

I eventually made it back to shelter, standing in a hut while trying to dry off the equipment. At this stage I just decided to get the recorder out and see if it now was working. It was! Not wanting to miss an opportunity, I stuck it on record and set the mic up to record the rain pounding down on the roof of the hut, dripping off onto the ground below. For about 30 seconds, while monitoring with my now soggy headphones, I listened to the sound of the rain, thankful that at least one or two recordings were made. However I heard a noise… music. The kids with the stereo system had found the hut too, stuck their music on full blast and completely ruined my recording, again! 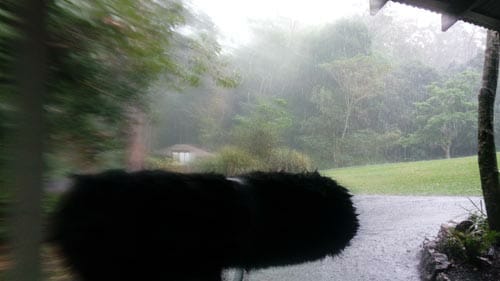 My phone was so wet, the camera lens had steamed up

I gave up and headed home. Once home I stuck the equipment out in the now sunny air and left it to dry. The recorder took an hour to fully dry out and work again, my headphones took the whole afternoon and the microphone was luckily protected by the windshield.

I did however manage to get a few recordings of rain, which you can download here.