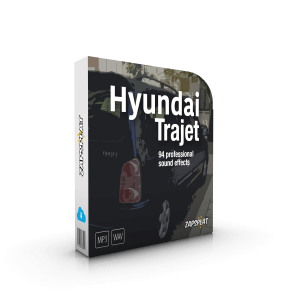 This pack contains 94 sound effects recorded both inside and outside of a 2006 Hyundai Trajet. This 7 seater family car has it's own unique set of sounds, so we decided to record as many of them as possible. We firstly took the car to a remote location on a dirt road and drove it at varying speeds. We set microphones up externally and internally, recording both the driver and passenger perspectives and also the car passing outside. We also captured the car driving up close, skidding, stopping and more. Next we did the same on a smooth road surface and even recorded the car passing while beeping the horn, that gives a fantastic Doppler effect. Next we pooped open the hood and to get the car starting and revving and also recorded the same from close to the tailpipe. There are various horn beeps, again recorded inside and out. Finally, we captured all the mechanical sounds inside the car, from the seats being adjusted, the internal compartments opening and closing through to the electric windows, blinkers and more.

94 files in this pack