Inspired by the old arcade games I found myself playing as a child, from Pac-Man through to the (now not so) advanced car racing games, I decided to create a free retro game sound effects pack that focused mainly on the musical elements, but not the music itself. Think early Mario. 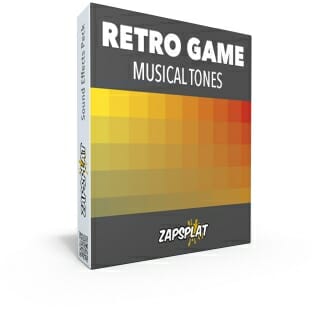 Sometimes recreating the raw, lo-fi sound takes a bit more effort than designing modern game sounds. Modern synthesizer presets come stacked with effects and layers and sound great, but for this, I had to create my own patches, using only the most basic settings.

Using lots of raw waveforms, this pack contains rigidly programmed notation, minimal chords, monophonic melodies and barely any effects. Obviously I had to play a load of games to get the basics in my head, a challenge gladly accepted and that took me back to being a child again.

Speaking to many game developers over the years I know that some sound effects are more desirable than others. I was informed that some generic short tones that can be used for many different in-game scenarios were needed, a range of positive and negative expressions, level up, success and level complete sounds as well as some timer elements for when a player is playing under a time limit. They also wanted some fail sounds for when a level isn’t completed or when a player loses a life etc.

For the soundfx in this pack, I used around five synth sounds and created various versions of each expression. They all feature a level completed sound, positive and negative expression as well as a few others thrown in for good measure. The generic sounds can hopefully be used for all manner of onscreen, in-game actions and scenarios.

This pack includes a set of sounds that many game developers will find useful for certain games. I plan to create a few more packs with similar sounds, and also some more specific packs. I’ve started work on a ‘Collect and Gain’ game sfx pack. This will contain many sounds that will come in handy for when a player gains a point, collects a coin, wins a trophy etc. I’ll also be creating a sound effect pack exclusively (well not really) for use in shooting sci-fi games and will feature lasers, explosions, missiles etc.

If you have a request for a particular theme of pack, let me know in the Questions and Answers forum here.