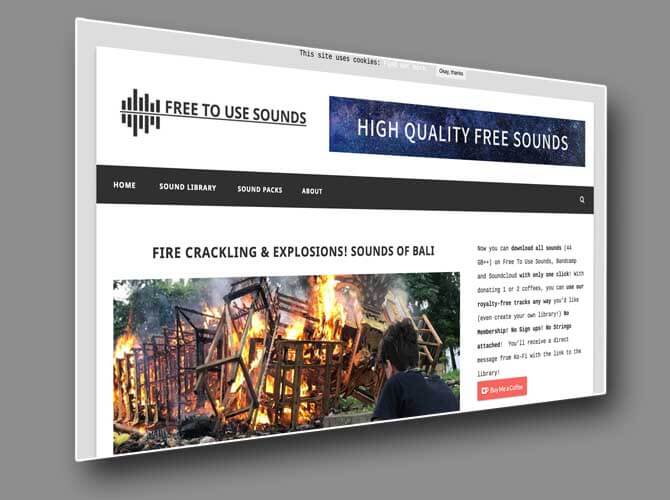 I few months ago I had an email arrive in my inbox from an enthusiastic and highly motivated individual named Marcel Gnauk, who informed me of his website and enviable lifestyle, traveling around the world recording sound effects. In fact, just a few days before receiving the email, I’d had a conversation with my wife expressing a desire to do the exact same thing.

On taking a look at his website I was impressed. Marcel and his partner Libby have been on a mission since a chance meeting in 2014 in France

Our adventure began in 2014 when we met by chance on the Promenade des Anglais in Nice, France. At the time we were two strangers residing on different continents, the one in Switzerland, the other in Los Angeles. While traveling around the world we came across so many amazing sounds and we thought why not making these sounds free available.

The first thing that hits you when you visit FreeToUseSounds.com is that this is something different, something that until now hasn’t really existed. Yes there are tons of sound effects libraries and tons of blogs, and a few that cross-over too, but Marcel and Libby have created something that grabs your attention from the moment you arrive and keeps you gripped to the site.

Their website is a blog that details their travels with a mixture of written words, photos and of course, sound. Every sound has a story and that story is told in great detail. It’s almost like the ultimate form of meta data tagging, but one that is much more engaging.

One of the things I love most about each sound on their website is being able to read about the location, the situation surrounding the event, or why the sound came to be, seeing the photos and then listening to the sounds after. It almost feels like you were there with them and are part of their journey.

The sounds are easy to download. You simply can download them directly from the post. If you want to remove the attribution requirement in using their sounds and/or download the entire library (it’s a huge library of many GB of audio) then you can do so by making a small donation in ‘coffees’ and I’d highly suggest you do. By donating a few dollars, you’re helping the duo keep on the move and the library to grow.

FreeToUseSounds.com offers sounds in their original, mostly unedited state and at 24/96 uncompressed wav files. Marcel records long versions of each sound and presents them in a form that allows the end user to take sections that appeal to them, or use the entire thing. Here at zapsplat.com we often get asked if we can provide longer ambiences, so when we do, we always point them over to FreeToUseSounds.com as we just can’t offer 15 minute long ambiences and deliver them efficiently.

The downside to such large files can be how long they take to download, but I have to say, they’re worth the wait. Marcel uses a range of professional recorders and microphones (you can see a list of the equipment he uses here) and is obviously knowledgeable about recording techniques and microphone placements.

Marcel also has the kind of personality that gets him places. You can often hear him thanking people for letting him record in the recordings themselves and appears ultra confident which, I have to say is a trait you must have in to succeed in this industry.

FreeToUseSounds.com is a fantastic free sound effects library that also offers a genuine backstory behind each sound. If you’re looking for authentic ambiences from around the world, then this is the site for you. Marcel and Libby are still on the move, so this is also a resource I’d highly recommend you come back to and visit as often as you possible can.

Marcel and Libby have also very kindly contributed shorter versions of their sounds to zapsplat.com, which can be downloaded from their account profile here. However, if you’re not in a rush and have time to appreciate their longer original recordings, I’d highly recommend you check them out too.